"Angel On My Golf Cart"

So Much For Rest - My day was done. And then ... the phone rang. It was Annell Haasse from The Montclair, a retirement community in Springfield. Sheri had told me that Annelle was interested in this kind of work and that I should reach out to her while in town. Here I was thinking this was going to be a bit of down time. Guess what? No way.

“What are you doing right now?” she laughed. “It’s actually on the way back to your hotel.”

And the next thing I knew I was driving down National Street and heading to The Montclair to meet Annelle. The residents were just finishing their suppers so we were able to meet a few folks as Annelle gave me the fifty-cent tour. One woman, Florence, is 104 and, although hard of hearing, (we had to lean in and shout into her ear), she’s still as sharp as a tack. I’m not kidding. She asked me a lot of questions about Eldercation and joked around the whole time she was doing it. We’ll see if that interview pans out. Back in her office, Annelle started making calls, contacting 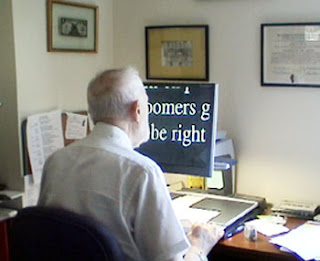 residents and setting up times and places for me. What a gal! I've included some sample shots of a few of The Montclair folks.

Ralph Miller - "He’s so shy," one of the residents told me, smiling. 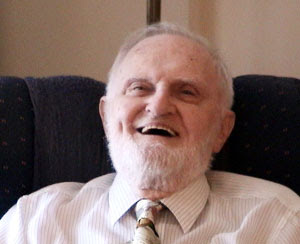 Everyone at The Montclair loves Ralph and let me tell you – he’s not shy.” Ralph is a prolific writer and has made it a hobby to write about and take photos of the places he's traveled to throughout his lifetime. His overall philosophy boils down to this: “Don’t Hurry, Don’t Worry.” And he most definitely walks the talk. I spent an hour with Ralph and could easily have spent ten. He suffers from macular degeneration but that doesn't stop him a bit. At the end of our visit, Ralph was kind enough to give me some books he's written as gifts, which I'll be posting on the "Tapping The Resource" section of the main website. 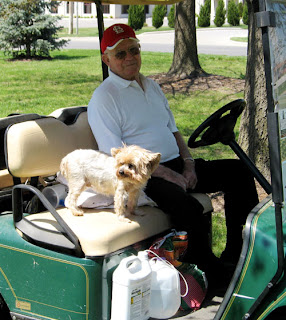 snap a few photos on a gorgeous Missouri day. I noticed a man wearing a baseball cap, sitting quietly in a golf cart. I smiled when saw a glass of iced tea, (I’m guessing that’s what it was), propped up on the steering wheel as the man sat quietly, enjoying the sunny day.

“Hello there, Harry,” the man smiled. It was Jim Mays who I interviewed earlier that same day. "Quite a way to travel!” I laughed as I walked over to him. A light tan object blurred past my left foot and hopped toward the cart. “C'mon, Angel,” Jim called. This was the cute little Yorkie Jim had talked about earlier. It was cute the way Angel hopped up onto to the seat to lick Jim's fingers. I snapped a few photos for them, which I’ll give to Annell so she can give them to Jim. From the pool/game room, to the community 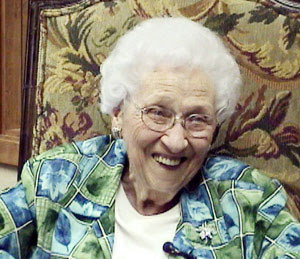 room with the huge TV, to the private dining room – The Montclair is a very homey place. And it's a joy to watch the residents freely interact with one another and with me. It was nice to see Martha (up to the left) and Ralph from the day before. “Hi, Harry,” Martha smiled as she moved into the center seating area, waiting to go into dinner. I sat for a bit with both her and Ralph and then Jim came over to 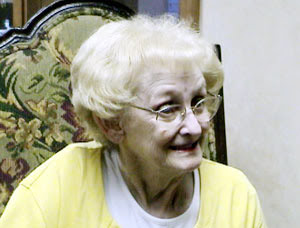 join us, as did Liz (to the right) and Norma Jean (to the left). I could tell some of the other residents were curious about the stranger talking with these folks and, when asked, I told them about the project, assisted by my former interviewees. Part of me wanted to get right back in there and pull out a tape and sit with all of them, but I know there's a limit to how much I can accomplish in one place at one time. I know I keep saying this but, certainly, there’s no shortage of folks to talk with out here on the road. "It's pretty hard to pick five out of 150," Annelle laughed as we sat together with the resident list. That's the same thing Liz Hamlett expressed at the Waterford in Texas.

This seems to capture an important point - each one of us is building an impressive portfolio of experiences and a trove of resources that someone can benefit from.

Your work is helping to unlock those troves and making life-improving connections for people.