The Back Burner - It's been a long time between blog posts, I know. Finishing the book, packing, moving things around (including myself) - it's meant putting some things on the back burner, as they say. That explains the disappearance of my blog writing.

But that's changing now. If nothing else, writing more, and doing it daily, often forces my brain to get creative. It doesn't allow me to be lazy, which I can, of course, sometimes be. I remember when I first left NYC and headed to the Midwest, it was the daily journal writing (which turned into the blogs) that kept the juices flowing. And from that writing, everything else seemed to blossom. It's hard to explain, but I know it happened.

City to city, I managed to find some quiet time to sit and reflect on... well... anything. If I ate at a good restaurant that day - I wrote about it. If I visited a national landmark or met an interesting person - I wrote about those things. I miss that aspect of my life. Call it "mundane routine" - something pulled me away from that writing practice. Once settled into the Kansas City phase of my life, I soon fell into a schedule. The adventure part of my journey came to a halt. Work at CBIZ three days a week pushed me into the business world again. And during that set-aside "business" time, I did legislative research for a living, which I enjoyed for the most part. I know that sounds hard to believe, but it's true. And the truth is, that work proved to be the perfect balance against the "other" side of my life. The Eldercation side.

The balance of my week was then spent transcribing interview tape after interview tape, one after the other, day after day, week after week. Once that was "done" (a relative term, since I'll never really be done with this process, I love it so much) - it was time to distill each interview down to a page or so.

And that's a quick explanation as to why the blog writing was put on hold. Some folks seem to be able to do it all - all the time. For me? I made a choice, and my choice was to pay attention to one thing and one thing only: the book.

And I'm happy to report that the book is done. I've taken it as far as it can go.

Onward & Upward - (Actually - EASTward) - It dawned on me that most, if not all, of the folks who are going to help me set up Eldercation are located in the Northeast, so I've decided to 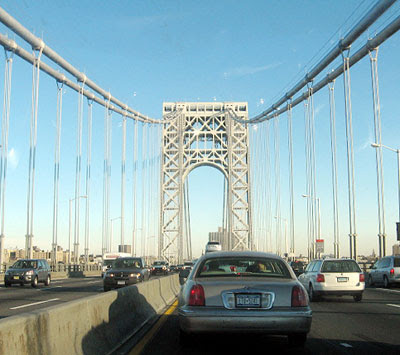 head back that way for the time being. I'm keeping my main address in Kansas City and will come back that way periodically. But, for me, it's time share with the world that which has provided so much joy to me all these years. And to do that, it means traveling. Again.

After dropping off some things with my brother in Chicago, I headed East two days ago, stopping for one night some place in Western Pennsylvania. I think it was Clarion, PA? Honestly, I'm not really sure where it was. And it didn't matter all that much. A drive from Chicago to NY means you only have to remember two numbers: 90 and 80. Trust me, there's nothing all that interesting about that particular drive. And there is certainly no way to get lost. I can't remember the last time I drove such a long distance (850 miles or so) and never once did I look at a map. So, in that sense, a pause to find some place to sleep for the night - it could have happened anywhere. Quite frankly, I really didn't know where I was most of the time. I just watching the signs for the big cities on the route, "Toledo, Cleveland, Pittsburgh, East Stroudsburg, Newark, New York - and as long as the numbers to those locations kept shrinking, I knew I was doing okay. So, to me, a stop was a stop - it didn't matter where I took my rest. All I needed was a warm bed, shower and a good breakfast. This particular time - it was a Quality Inn - Clarion, PA. (That's what the address on the phone said).

I've Arrived - The sight brought a smile to my face. And I snapped this photo (with my "LCD-less" digital camera. Built-in obsolescence, you gotta love that). I glanced to my right, d

own the Hudson, looking at the NYC skyline. "I used to live there," I thought to myself. And then I kept driving North on 95 until... everything stopped.

Let me put it this way: it took me 14 hours to get from the front of Stuart's Bikram studio in Evanston (Chicago) to the middle of the George Washington Bridge. Then, it took me almost three hours to get from the middle of the GW Bridge to my Aunt Florence's house in Oceanside (Long Island). Traffic, traffic and more traffic. On 95, The Cross Island Parkway and the Southern State Parkway. 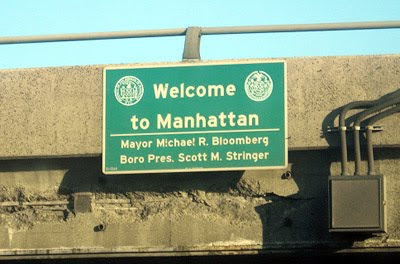 "How do people deal with this everyday!?!" I wondered, over and over again. I remember asking myself that same question most of the time I lived in the city.

And over and over again, as I drove I thought, "I will never, ever return to this kind of life.

As much as I love NYC, and I do love it very much, I can't see dealing with this kind of... what can I call it? Congestion? I lived this life for many, many years. But now, it's all about setting up this fantastic project.