I love being on the road and know I've made that clear several times. But there have been many moments when my mind has wandered and I think about the city, especially when driving. It's funny. I was there for a long time, same apartment, same street. 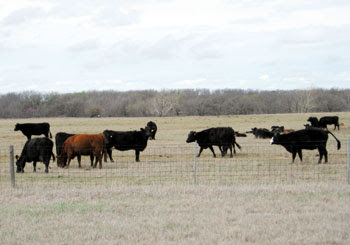 And yet it's hard to picture so much that became seemingly familiar over those years. Just this morning I tried to picture West 87th Street, the sidewalk, the people doing the alternate side of the street parking thing, the sound of the garbage trucks, street cleaners. And of course, that constant hummm. I can't really describe that sound but I'll tell you one thing. You really notice the void when the hummm is gone.

So last week while driving back from Topeka, I decided to make a quick list of things I miss about the city by talking into the digital recorder. I'm sure I missed some big things and also sure the list will be different in a few weeks. Still, here's what I came up with while trucking down Interstate 35, looking at the cows in the humm-less, open fields: 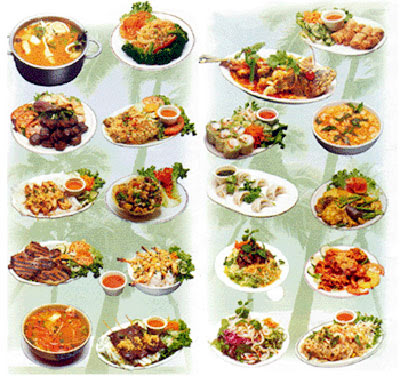 ove Vietnamese food. And for me, nothing beats Saigon Grill. "Best bang in NY, dollar for dollar." I remember the day Howard said that while we sat in front of the TV, eating SG take-out, watching some kind of game. There was a time when I ordered in from SG four times a week and they'd be at my door just about the time I'd hang up the phone. (There’s a place in Wichita called Bella Luna that serves a mean chicken curry. Surprisingly, there is a strong Mediterranean presence in Wichita - a large Lebanese population).

2. Columbus Star Bagels - Technically, this shouldn't be listed here because the store (corner of 91st and Columbus) suddenly closed about two months befor 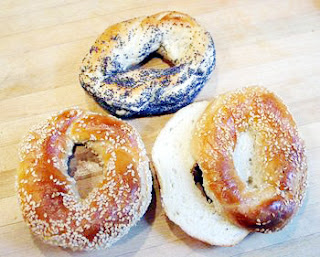 e I left. Still, I miss it, so ... it qualifies. H&H? Too sweet for me. And I never liked those water roll type of bready bagels. Columbus Star bagels were large, chewy… They were just plain old good. All that’s left now is a bagel memory.

3. People Watching. It didn't matter where or when. The subway, Gristedes, the bus, walking down the street... This is one thing I loved about being in NYC. Can't beat it. Then again, it's those same people who often freaked me out - too many of them. Talk about the love-hate thing kicking in.

4. Friends - Of course I miss the people I've come to know over the years. And of course, I won't list anyone for fear of leaving people out, but this is something weighing on me as I break free of a very familiar life. If I choose to start somewhere completely fresh, the upside is I get to meet new people, which is something I love to do. The down side? I'll meet new people. The older, familiar ones, the ones who've worked their way into my 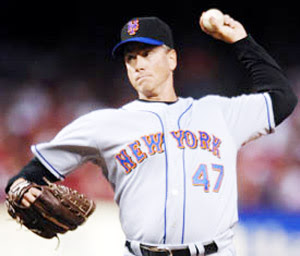 life - I won't be able to grab a bite to eat with them, or catch a movie, or head out to Shea... Enough said.

5. The Mets - There was nothing like being able to hop on the "7" and head over to Shea on a whim. There's something 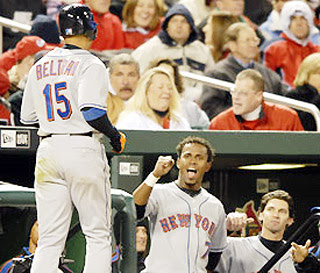 about baseball - it's in my blood, thanks to my dad and Aunt Fritzie. And, trust me, I’m following the Mets on MLB.com and love that they’ve started 3 and 0. I'm looking ahead at their schedule to see if there's a way I can see them while I'm out here. St. Louis could've happened but I noticed it too late. Do they play baseball in Nebraska?

6. The Edge - No. Not him. I'm actually not sure how to put this into words. I think my brother once talked about this concept with me. He said … now how did he put it? "It's a kind of danger; you always have to be a on your toes here." Now, of course, this is the very thing that stresses out a lot of folks in the city. But, you know ... when I'm away from this "edge," we'll call it, and in more placid environments, things seem almost boring and, guess what? I miss it.

7. Bike Riding - Over the past year, just before I left, I made one of the best investments possible: my Raleigh hybrid. I'm only sorry it took me so long to make the move. I had a great bike in Boston and some of my best memories of that city were taking rides along the Charles and over to Faneuil Hall to go to work. In NYC, I loved those 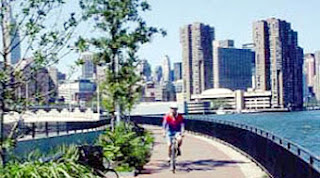 rides with Howard and Gail, down the West Side, under the highway, past the piers. Weaving in and out, avoiding trucks and cabs ... and tourists. The ones clicking photos while standing right smack in the middle of the bike path. "Oblivious," I'd whisper to myself, then turn to roll my eyes at Gail. Favorite rides? To Staten Island - there's nothing like taking that trip on the ferry and checking out that "other borough." Through Chinatown to seek out Bahn-Mi sandwiches. To Coney Island - from the Upper East Side! This was a challenge and a lot of fun. The guys at the bike shops told me the city's expanding the number and quality of green-ways. Check them out. It's a great way to see a very different NYC.

8. Central Park - When I moved out of my CPW apartment and stayed for a few weeks on the East Side, it killed me to be so far from the park. The plain fact is I couldn't have lasted in the city for as long as I did if it hadn't been for the park right outside my door. There was something about being able to get up in the morning, walk across the street, stretch against my favorite tree near the water fountain and start my run around the reservoir/horse track. Seeing other people running, strolling, sitting... Sure, the air is dirty, (you really notice this when you take 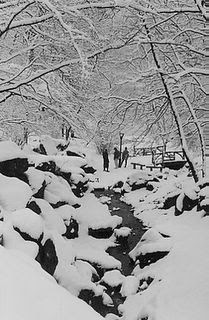 runs outside the city), but that's a given. There's something almost sacred about that reservoir area for me. I shared happy times with some very special people, running and walking around that area. And I worked through some of the worst pain in my life by spending time there as well. I missed Central Park while I was still in the city. Now I really miss it.

9. You're not going to believe this one. The Weather - If I was standing on the street waiting for the bus right now in a 15-degree wind chill - I might not be writing this. But the thought about bundling up in the cold or the snow actually sounds good for some reason. And when it snowed there and everything became white... that's when you'd find me in the park, wandering about, taking photos. The pic on the left is one good example of a special day I spent walking around the park. There was a perfect consistency to the snow that day where it seemed to stick on the trees like bright white cotton. And that's just the winters. What about the spring - with the emergence of everything green? I remember walking up W. 87th street to the subway and glancing across the street, noticing how each day around April, it would get just a tad harder to see through to the reservoir as the trees started to bud. I haven't mentioned fall, but that's a no-brainer. When I meet people who have never been to New York and they ask when's the nicest time to visit? Christmas is always great but let's face it - there is nothing like autumn in New York. It's why they wrote a song about it.

bagels. But the pressure was really on when I reached #10 and it seemed downright nuts to list only three food favorites. (Charles - it's tough to put CPK on here simply because I can get that fix just about anywhere in the U.S. - although I haven't found one in the Midwest yet). But New York food? The choices, the flavors, the smells. Nothing beats the city for food. I ordered some take-out Italian one night in Oklahoma and it was ... okay. But, c'mon. There's no way it's going to compete. As I said, the biggest surprise was finding great Mediterranean food in Kansas. Who knew? And hooking up with Jonathan Shames and his family in Oklahoma City for brunch at their home…

“You mind bagels and nova?” he asked the day before.

I teared up when I heard those words.
Posted by H.J. Getzov at 7:02 AM