Some of you will remember a blog post for a few months back - if you didn't see it, I'll paste link here: "Those Were The Days." When I wrote and posted that piece, I never thought ...

... Well, this morning on the way to work, I passed a Quik-Trip and immediately noticed today's unleaded regular gas price - $1.59!! (Update: Now $1.49) Okay, so the election is now over and the conspiracy theories don't seem to be taking hold any longer. The price is dropping faster than I've ever seen prices 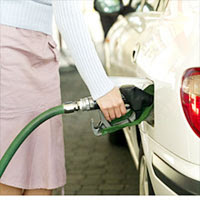 drop ... for anything. Honestly, I can't believe what I'm seeing these days. And it's changing by the day. It seems like just yesterday the prices cracked the $4.00/gallon barrier and they were talking about $5.00 or $6.00 prices by the end of the summer. Well ... it didn't happen, although at the time, it seemed like we were easily headed up, up and away. The fact is, as fast as prices are plummeting now, that's how fast they were shooting up earlier this year. Listen, I'm not complaining here. It feels good to be spending only a third of what I was spending on gas - actually, it feels tremendous. And with the way things are looking with the rest of the economy, the increasing layoffs, the Dow inching below 8,000 for the first time in many years ... it may well be that the less expensive fuel is the only thing keeping this country's act together. I can't imagine what things would look like if fuel prices were too high now, as well.

Anyway, on the way home today, I had to pick up my cleaning and I made the turn at 53rd and Main, where I spotted - yes, yes ... my favorite gas sign, still showing that $1.25 figure. Will we? Can we? Dare I even whisper it? Listen, when the gas price was at $4.00/gallon, I would've scoffed at the very thought of a return to what I can only call "yesteryear" prices. When it then dropped down to the $3.00 level, I still wouldn't have given it a chance - I just figured it was someone playing hanky-panky with the oil price levels - for political advantage. Yes, I'm one of those cynics,I can't lie. Then, when the price started approaching the $2.00 level ... well ... I remember driving

past the Quik-Trip sign one morning and I actually saw them changing the price board - where the first digit was moving from "6" to "5" to "4" to "3" to "2" to ... "1!!" What a countdown. I think I pulled my car over to the side to take in that special moment. And that was only about a week and a half ago.

So, now that it's at $1.59, what's to think it won't ... now, I don't want to jinx this. Could it actually break a dollar? A friggin' dollar!? I can't remember the last time gas cost less than a dollar a gallon, can you? I'll have to check that out. I mean, wouldn't that be something? Of course, few of us will have jobs, food prices will continue to soar, and I won't have any place to service my Pontiac Vibe when it needs help - (it's a General Motors/Toyota joint-venture car, so let's just hope the Toyota people let me in the door when I come 'a callin'). But at least the price of gas will be a true bargain, thank God for that. I knew there had to be a silver-lining to all of this.
Posted by H.J. Getzov at 6:17 PM No comments:

The group was great, much larger than expected, actually. I'd say, by the time I pulled out the first article, about 20-25 people had taken their seats - they were ready to go. It was time to talk about the world.

Mary Jane first suggested the idea to me about two months ago - to come up to Garden Village (my adopted retirement community - the first place I visited for interviews when I arrived in Kansas City) - and do a kind of current events discussion group thing. (Mary Jane is the activity director at Garden Village). We didn't know what it was going to look like but I certainly had no problem with winging it, this being the debut and all. I knew I was comfortable there, so it was pretty much going to work out, no matter what.

Over the weekend, I spent some time perusing through the NY Times, KC Star and looking at different web news portals. By the time I'd finished, I'd plucked out about ten articles - more 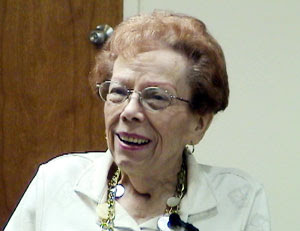 than enough to keep us busy for an hour or so. I was excited about heading back up to Garden Village since I hadn't been up there in ... well ... it had been too long.

"Save One For Me!" - As soon as I walked into the place, I saw Mary Jane, walked over to give her a hug and heard a voice from above. It was Martha, one of my favorite Eldercation interviewees. She was walking on the third floor and I saw her waving over the balcony, flashing her warm smile, as always. She was laying a claim to the next hug, of course.

Once Mary Jane and I had worked our way up to the third floor, there were more hugs to be had - and new introductions as well. Mac was there - all 101 years of him (he'll be 102 this coming December 2 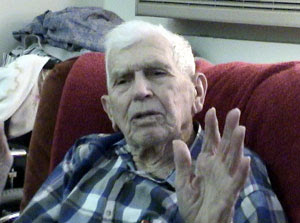 3). And Faye was there, too - some of my favorite folks. Mary Jane and I decided to move the group from a formal, rows-of-chairs setting, over to an area with couches, pillows, comfortable easy chairs - to keep things more relaxed and intimate. I'm glad we did that.

Once settled in, it was time to start class. And it didn't take all that much to get started, let me tell you. No matter the subject, the group was more than eager to express themselves. One subject, in particular, started to take over the session and you won't be surprised by what that was. One week out of the election - possibly one of the most important elections of our time - the news cycle was still focused on the political world, so there was little I could do to avoid the topic. And, trust me, I knew this was going to be the issue of the day and did my best to set up escape-hatches beforehand, just in case things started to get out of hand.

"I don't want any bloodshed today," I joked more than once.

And they all laughed when I said it, too. Still, I could feel the energy and could 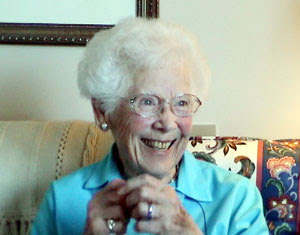 see that certain people were just itching to "have their say," which they were able to do ... until I stepped in with a "Whoa" and another joke about people not killing one another. The good news is that we ended up having a spirited discussion about voter turnout over the past 50 years, and there was another article which talked about a proposal to have early elections in Missouri for the next election. Those topics kept things pretty neutral, which was good. Toward the end we talked about the current economic crisis which then prompted folks to share stories about the Great Depression, which always interesting to hear about, especially because of what's going on these days.

And that's the way things went. It didn't take all that much to fill an hour. In fact, I wasn't looking at my watch, but I'm pretty sure it ended up lasting closer to two hours - the time flew by. Before people started to take off, we talked about a next meeting and decided December 8th would be a good date for all of us. We also talked about people clipping their own articles for the next session - items they run across in the paper, online, or even something they see mentioned on TV. This way, everyone agreed, they'll be more involved for much more than just the one or two hours we spend together.

When it was time to finally break things up, everyone came up to thank me for coming in - for putting the discussion group together which, of course, was more Mary Jane's idea than it was mine.

The fact is, every time I head up north to Garden Village, I get re-energized. I view that place as a kind of fueling station - a place that reminds me about why I'm doing the work I'm doing. Weeks and weeks go by where all I do is sit in the Roasterie or the library and I write, transcribe, write, and then transcribe some more. And I start to forget why I'm doing all of this in the first place. But five minutes sitting in a circle looking out at 20 faces - 20 curious, smart, smiling, fantastic faces - and I'm home again. And it feels good.
Posted by H.J. Getzov at 9:40 AM No comments:

This past Saturday, after spending the better part of the morning down at a Vietnamese community event downtown, I headed to do some grocery shopping and ran into a friend.

I told her I was planning on doing it the regular way, on November 4. "I've never voted here before and I want to take it all in," I told her. "You know, get a taste for the way they do it in Missouri."

Ten minutes and five horror stories later, she convinced me to try a different approach. Especially with the 2008 "unknown factors." I love, I mean I love that there is talk of an 80% turnout rate this year. (I'm praying for that, but it would truly shock me) But, having said that, I really didn't want to deal with an 8-hour line, so ...

Will 3 Hours Do? - Angry? No way. And the best thing is, I don't think there was one angry person in the lot. And I'm talking hundreds of people in the Plaza Library basement - one of four or five Kansas City absentee ballot locations.

This was such a joy today. Meeting people, I've learned over the years, is my absolute pass-time, so Election Day (or the day before Election Day) was, once again, right up my alley.

When I first arrived at the library, I wasn't surprised to see over 200 folks already lining the basement hallway. I started an informal poll, asking a few people how long they'd already been there - doing my best to gauge how long it was going to take. Honestly, it didn't matter what they told me, I was there to stay anyway, already armed with about 10 hours-worth of interviews to edit. (btw - I'm heading down the home-stretch, folks. And I'm excited about it)

I Stayed - I Visited -I Voted - As soon as I took my place at the end of the line, I met the most wonderful, warm woman. Little did I know at the time, that I'd be talking with this woman for the next three hours - every minute of it interesting, by the way. Of course, this always help time flow by, which it did. We talked about all kinds of things, including the election - (which we did very quietly, so as to not upset the election workers or other voters - the last thing I needed was a riot) The woman's name was Clara, a 50-60'ish? African-American woman, who was there with her husband. As great as my time with Clara was, I have to say, the entire group of folks, all kinds of people from all different races, ages ... you name it - they were great.

I wanted to make sure to get something about this experience in this blog. I have a feeling something incredible is going to happen tomorrow. I really do.
Posted by H.J. Getzov at 6:28 PM No comments: