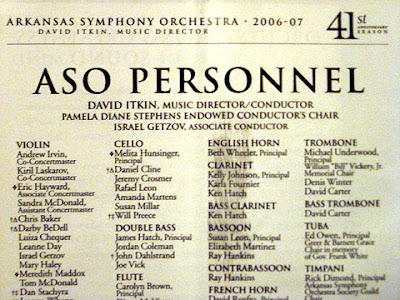 I went to see Israel and the Arkansas Symphony play the other day. He wasn't conducting but it was still cool to watch him play the violin. Before the concert, we met for a quick lunch and when it was time to head for the concert hall, there were only about 30 minutes before the show was to start.

"Into a nearby phone booth, huh?"

After the concert, which was great, Izzy came out to meet me so we could say goodbye. We were trying to figure out a time when we could get together a 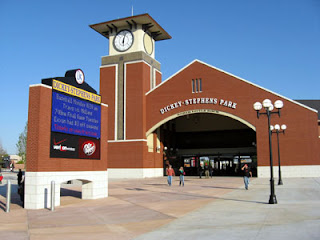 gain, but I was about to head up to Missouri and he had a bunch of rehearsals coming up so ... it'd have to wait until I came back, which I'm pretty sure will be soon. When I told Izzy I was going to try to get to a baseball game while in town he said he wanted to join me but the rehearsals made it too tough. "It's really close," he turned to point the way - "Around the corner from Robinson Hall and th 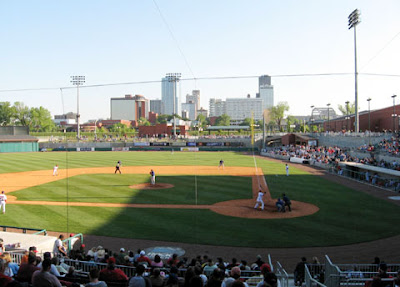 en over the bridge."

Now guess where I went after I said goodbye to my new-found cousin and walked out the concert hall door.

What a field and, get this. There was a game going on when I drove by. Perfect. I parked the car, grabbed my camera and then called my brother to describe the baseball setting. Sun low in the sky, beautiful 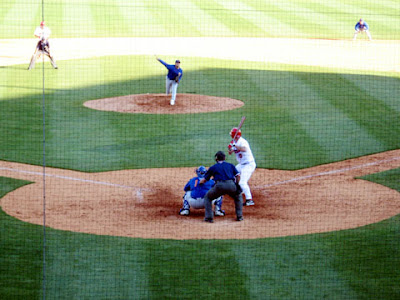 Little Rock skyline in the background, bright green grass, bat cracks, balls slapping into leather mitts. Ahhh. Heaven. At least to me, it is.

What's funny is that, at one point, I was so busy checking my camera and chatting with my brother, I didn't notice a foul ball that bounced hard off the pavement about three feet (I'm not exaggerating) from my left foot. It's the closest I've ever come to a foul ball and I almost got clunked in the head. 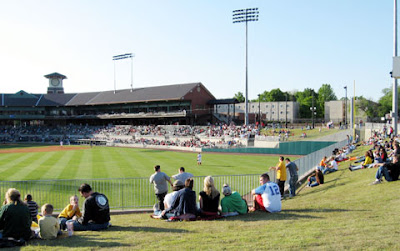 Now that would've been a story.

After the 6th inning, they don't check tickets at Dickey-Stephen's Park, (named partly after the late Yankee catcher Bill Dickey) so I walked right in. Here are a few photos. Check out "The Park" in the outfield, where families relaxed on blankets, enjoying picnic baskets. I could definitely live with this on a regular basis.