As soon as he ordered a Coke with lunch, I knew he was blood.

I’ll be short with this one but it’s a really good story.

When I told Stuart I was heading for Little Rock and Hot Springs, he mentioned something about a possible family member living somewhere in Arkansas. Stu's always scouring the country for Getzov's; we're a small clan always looking for reinforcements. I've found myself Googling "Getzov" every once in a while and learned there's an Olympic silver medalist from Bulgaria in the family, Valentin Getzov, as well as a famous violinist, Jimmy Getzoff, who played for years with Lawrence Welk and on a bunch of pop albums for artists like Hall & Oates. There's even a famous archaeologist named Nimrod Getzov, but that one I keep pretty close to the vest. (One note: a number of folks have changed the original Russian spelling, but if you ask me, changing “Getzov” to Getzoff” of "Getsoff" is pretty much asking for trouble). Anyway, this latest search brought up the name, "Israel Getzov" - the Associate Conductor of the Arkansas Symphony Orchestra. After reading up on Israel's background 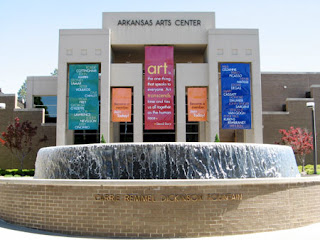 I sent off an email and then called one of his listed numbers to leave a voice mail. A few days later, Israel and I chatted over the phone, but it didn't take long for us to set up a lunch in Little Rock. I could tell he was a good guy and I was looking forward to meeting him.

As soon as "Izzy" walked into the restaurant at the Arkansas Arts Center, (great food, by the way) – I had a hunch about him. To me, there was a definite Getzov look. We shook hands and within minutes of making some "I love Arkansas" small talk, my pad was out and Izzy and I were busy building a poor-man’s genealogy. Circles, lines, squares, names, dates – “What was your dad’s name? How many brothers? Sisters? What year was he/she born?" As the chart expanded, the dates and calculations seemed to focus pretty much on two names: a Louie and a Mordecai. I started getting dizzy trying to figure out the relationships but Izzy said something funny. “I think the Jews actually had it right by not allowing people to be named after living people. It's much easier to follow the name trail.” We laughed, ate, drew some more charts, ... but something wasn’t matching up. Finally, something dawned on us. Izzy’s 30. I’m 49. Different generations. I picked up the pen and altered the circles so they grouped different name-sets and … voila! We were definitely on to something. We think - and this needs to be confirmed with some photographs - we think Izzy's great grandfather Louie was my grandfather Harry's brother. I called my dad to c 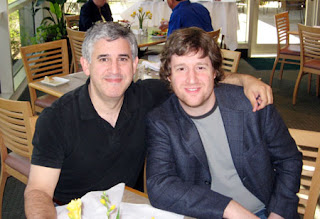 onfirm that his dad, (my grandfather) Papa Harry, did in fact have four brothers - Louis, Abe and Joseph. All the dates seem to fit in place nicely.

I'm sure we got a bit carried away with our genealogy spread out the table so apparently a few of the waiters were able to figure out what was going on.

“Long lost family?” the pretty hostess smiled over at us.

The waiters and hostess laughed - all of them confirming the likeness was pretty obvious. Our waiter was nice enough to snap this photo so ... what do you think?

It's funny how a stop in Arkansas wasn't in my original plans for this leg of the Eldercation trip. It's interesting how so many folks seemed to push me to head this way.

Definitely look alike in the eyes. I found your blog from Mr. Baker's. I'll definitely be checking up on your work. Have you read If I Live To Be 100? I'm sure you have, just reminded me of what you're doing!