Water Against The Dam

It's been a long time.

I've written that line before on here; more than a few times. But this time, I mean, it's really been a long time since I've posted on my old friend, Blogger.

In 2007, I decided to try a little experiment which involved leaving New York City and heading to the middle part of the country - to places I had never traveled before. I had always had an urge to drive cross-country so when the situation presented itself, I grabbed the opportunity to hit the road. At the time, I had merely scratched the surface of a hobby that was giving me pleasure - interviewing seniors - but I knew that it was time to get out of the city and take the Eldercation concept to a different level. (See: Not In NYC Anymore - February, 2007.)

The fact that I ended up living in Kansas City, Missouri? It is nothing short of amazing to me. I just looked at that last sentence and I still can't fully believe that I lived there. At some level, the entire Kansas City experience feels like a dream, although my memories of burnt ends and some very special 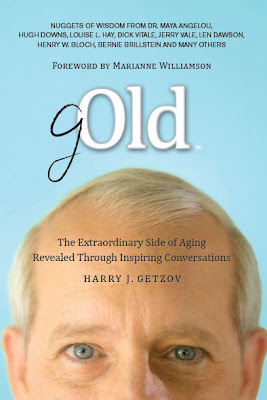 KC friends serve as proof that I was, in fact, actually there.

Anyway, I'm not going to write that much today. I am determined to learn the art of the concise blog post. That way I'll be able to write and post more consistently. Right now, all I want to say is this: I have spent the better part of the past year - more than that, actually - putting together a book that is about to be released in the fall. It is titled, gOld - The Extraordinary Side of Aging Revealed Through Inspiring Conversation (Greenpoint Press). I had no idea how much work went into the writing of a book. Sure, I had tried my hand at writing articles and have had articles published. Friends of mine have told me that I actually have a Ty Cobb-like batting average when it comes to my ratio of articles submitted to those actually published. I'm happy about that. But articles weren't enough for me. For some unknown reason I had to write a book. And so that's what I did. The truth is, I didn't really set out to write a book. I was just out in the world interviewing senior citizens and once I had stockpiled many hundreds of MiniDV tapes, I had to figure out what I was going to do with all of this information. I have long wanted to find a way to allow others to, in some way, get just a taste of what I have been experiencing while I have been on the road interviewing some terrific senior citizens. A book just seemed like a great place to start.

And so that's where I am. After many years of holding things back, I am ready to lift the curtain on a good portion of this work.

As things begin to fall into place, I invite any one who is reading this to follow Eldercation and gOld at the following locations: