The Day I Was Born

Tomorrow ... I've been a bit worried lately. Worried about my birthday, which, incredibly, seems to fall on the same day every year. Amazing. Seriously, I've been concerned because the way I've planned things this year, the way things are unfolding I'm going to be in Kansas City on that day, which is December 28, by the way. And, usually, this less than ideal calendar positioning makes for some less than interesting birthday celebrations. I mean, 12/28 is right smack in the valley between Christmas day and New Years, so you can imagine just how eager folks are to go out and party yet another time. Sure, when I was a kid, it was actually pretty cool to have a birthday during that week. My friends were always around and, as a bonus, we were always off from school. What could be better? Add 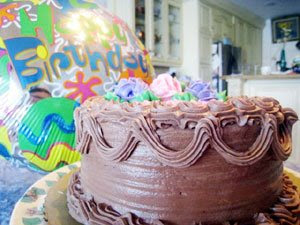 to that, if the Jewish lunar calendar was cooperative in a given year, it was also Hanukkah at the same time. Talk about a windfall.

But once I went off to school, the realities of a 12/28 birthday started to take hold. The hard truth is that folks just aren't around when it's time to cut the cake and blow out the candles. Actually, (now this is not a pity statement here, I'm just stating the facts, Mam. Just the facts) - I can't remember the last time I even had a birthday cake with candles placed in front of my face. Come to think of it, I was just at a friend's birthday party a few weeks ago and I was sitting next to him when the cake was presented, so ... the cake and candles were, technically, in front of my face. It was thrilling for me. (Note: I've decided this year's going to be different and decided to make a list of folks I've met here in KC and plan a fun night out. Perhaps Spanish food, lots of sangria, and then ... yes ... karaoke. Why the hell not? My "month after my birthday" celebration. It's time.)

A Return To Blogdom - I haven't written on the blog in a long time but figured this would be a good time to dive back in. The book is almost completed and my attention has been focused solely on that over the past few months. As most of you are aware, the ones who really know me, Eldercation is my labor of love - it means a lot to me. And the past few weeks have been especially challenging as I do my best to put into words just what this project means, not just to me, but what is can mean to a lot of folks out there.

Well ... I'm happy to say, I've plotted out my day tomorrow, and it's looking pretty good. Of course, with 51 years of living comes a bit of wisdom, and I know that the very best things in life usually present themselves when they're least expected, so ... I look forward to the unplanned part of tomorrow. What I have planned however, is the following:

Next - off to yoga. I've been practicing a lot lately and the past few weeks have been especially fulfilling. You see, my gift to myself in 2008 has been one of the best gifts I've received in many years. This year I gave myself a new body. Now, I'm not trying to be funny there - I really mean what I just said. About four months ago, knowing my birthday was coming up as it does at the tail-end of the year, I decided to create two deadlines for myself. One was to finish the book. And I've pretty much done that - I'd say I'm about 99% there. The second commitment I made to myself was I decided that, after years of reading about the body-mass index ("BMI") and flirting with reaching that number a few times - this was going to be the year where I reached my goal weight. The actual number always seemed kind of ridiculous to me; a man my height is supposed to weigh 165 pounds!?! For years, I've laughed at that figure. But to get to a BMI of less than 25, which is what they call "normal" weight - that is, indeed, the number. There' s nothing I can do about it.

It's funny, pretty much since I was around 20-25, I've always hovered around the 185-188 area, only once flirting with 190 when I lived in Carroll Gardens, Brooklyn. Of course, that's when I had Nino's 50 feet from my Henry Street front door, with it's silver tins filled with seemingly unlimited portions of eggplant rolatini and ziti parmesan (and the best Italian bread I've ever tasted. And the best cannolis I've ever tasted ... I could keep listing things here, by the way). The more I think about it, it's incredible I didn't weigh 300 pounds back then. Thank God I have at least a little vanity in my makeup and that I do, in fact, care about the way I look. More importantly, as I've lived through my 40's and now starting my 50's, I've become much more aware of my health and nutrition. Hence, the Bikram yoga and the occasional dates with Stanley Burroughs.

So, did I reach my goal? Keep my commitment to myself? Well, I already gave away the answer to those questions when I talked about my gift to myself. As of a few days ago, I finally broke through the 170 barrier - I'm now in the high 160's. A big moment for me. That means a loss of about 20+ pounds, with a bit more to go. And I'm doing it the best way, I think. I'm still eating. Trust me, I'm still eating. But - and here's the secret - are you ready? It's so simple - I eat less food. Who knew? If you want to lose weight, folks, you can try all the diets, pills, shakes and tricks in the world. But believe me, the only real way to lose weight effectively is to simply eat less food. It works.

But, back to tomorrow. It'll be yoga, followed my a 1 1/2 hour massage, following by a movie. I love history and have heard great things about the new Tom Cruise movie, "Valkyrie". I'm a fan of World War II history and have always been intrigued with the whole plot to kill Hitler thing, so ... I'm there. (btw - It was a tossup between that and the Benjamin Button movie, which I'll see next week). So, I made my trip to Whole Foods earlier and compiled a nice, spelt sticks, sesame sticks, cashews and wasabi pea mixture, which provides me with a healthy snack tomorrow while watching the attempt on the Fuhrer's life.

Now, what to eat? Yes, I'll have a healthy alternative to 4,000 mg. of sodium popcorn while I'm at the movies. But, when it comes to my birthday meal?? I'm not going to be a moron about it - it'll be more than carrots and celery sticks for me. I've thought about going the red meat route. After all, I'm in Kansas City - home of the Kansas City Strip. And I've grown fond of a place across the street - the M&S Grille. Great bar, by the way; always a nice group of people there. And ... because I've been TV-less now for almost three years, that's where I watch my sporting events. (I feel the Jets/Dolphins game a callin'). M&S is known to have one of the best steaks in the city, so ... we'll see. I've been veggie now for about five weeks which, I know isn't a very long time span. (Stu - the last meat I had was that Portillo's Italian beef. I think that alone will keep me from becoming a vegetarian). But, all jokes aside, I feel friggin' great and have to believe the new diet choices have at least something to do with that good feeling. I'll see what happens tomorrow and won't hold back if the spirit moves me.

For dessert? I'm a huge fan of the apple crisp dessert at the Cheesecake Factory. I've mentioned to a few people lately that my dessert instincts have shifted over the past decade or so. I used to make a beeline for anything chocolate. As a kid, my favorite dessert was a hot fudge sundae at Friendly's with chocolate marshmallow ice cream and chocolate sprinkles. Chocolate, chocolate and then more chocolate. But, I've noticed that 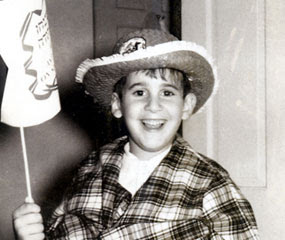 kind of thing doesn't get my juices flowing any more. It's the fruit desserts - especially the apple cobbler/crisp kinds of things. And, yes, they have to have good ice cream on them. I'm thinking that will be tomorrow's dessert. I'll stuff a candle in my pocket.

So, that's that. A self indulgent blog entry, to be sure. But, what the hell? It's my birthday tomorrow.

And, yes, one more thing. An important thought. I forgot to mention that throughout the day, certainly while sweating my ass off in class, my mind will wander around to the notion that, yes, Harry Jacob Getzov was born on December 28, 1957. That's the day I started my life on this Earth and I won't allow that concept to escape me. And I'm just trucking along. Not exactly the way I thought I'd be trucking but ... isn't that a silly statement, now that I think of it? How was I supposed to truck, anyway? Everything appears to be working out just fine. After all, I have an improved body, a super-duper movie snack ready to go tomorrow, I'm going to watch Tom Cruise try to kill Hitler, and ... the Mets have a closer. Actually, I've been corrected on that one. They have TWO closers!! What could be better?