I’m not going to get into it here, but I’ve had a few issues with my car rental. It has something to do with the fine print in my credit card agreement, the collision damage waiver and all that. Oh, what the credit card companies don’t tell you when they're pushing one of their 500 cards on you. Anyway, Enterprise has been great in helping me weave my way through the issue and, one young man, in particular, James Oaks in Wichita has gone the extra yard for me. While on the phone a few days ago, we were talking about Eldercation and I was able to tell him about what I'm doing while on the road. I was pleasantly surprised when James called me later that same afternoon to make me an offer I couldn't refuse.

James told me about an Enterprise program where the company hires seniors, often senior couples, to drive for them when they need vehicles shifted around from location to location. I had actually met a couple last week at a Wichita Enterprise office and they told me how much they love working this way.

And with that, I set my alarm.

I read the sports section, sipped a cup of coffee and waited for James in the front lobby. When James walked in, we shook hands and he asked me to follow him as we slipped through one or two doors and then into a back kitchenette area where I was greeted by about ten to twelve 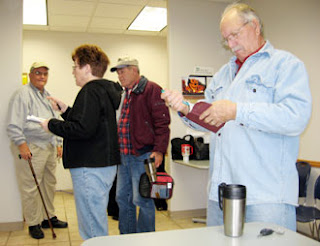 smiling seniors; all of them ready to go. It was payday so they were all waiting for their paychecks as well as driving assignments. James introduced me as his guest, his thought being that some of the folks might be open to an on-the-spot Eldercation interview. But it’s tough to waltz into a situation like that and expect people to open up quickly. Still, I passed out some cards and a few people seemed interested in what I was doing.

“Not bad for a few days of work, huh?” one of the women showed me her paycheck for a few hundred bucks. And the thing is, these people love what they’re doing and they get to do it at their leisure. I spent a few moments discussing the driving program with James and am thinking about speaking with a few of the drivers separate from the Eldercation project. So many people out there might figure older people and driving would be a bad mix. But that’s not so. “No way," James explained. "These folks are never in a rush. They’re actually some of the best drivers out there," he added. "What can I say? It works," he smiled.

Alternative Gifts - One note about a Friday afternoon interview with a very special lady. Her n 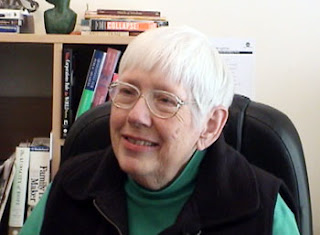 ame is Harriet Prichard and she's the founder and CEO of an organization called Alternative Gifts International. I’m not going to write much about Harriet here since you’ll be able to see an excerpt once I post it on the main part of the site. Still, I was struck not only by the woman behind the organization but the organization itself. AGI is a unique organization centered around the act of giving but giving in untraditional ways. Back in 1980, while still working as director of Children's Ministries at the Pasadena Presbyterian Church, Harriet's dream was to figure out a way where the children could give gifts for Christmas but do it in an unusual way. She organized a market where kids and adults could sell goods and animals for persons in need from Third World countries, as alternative gifts. "Cards were inscribed with the gifts purchased and sent to friends and relatives to inform them that an alternative gift was given in their honor." I encourage you to check out the AGI website to learn more about this organization's important work.

At 78 Harriet is certainly still going strong. “I don’t want to stop working and don’t see myself stopping any time soon,” she smiled. “Of course, we’re figuring out a way for me to pass the baton here,” but I love working. I really do."