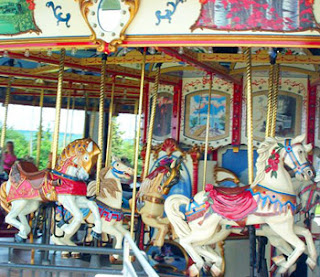 I used to love those walks to the Forest Park Zoo, where my brother, sister and I would watch the animals outside and in the big (and smelly) monkey house. My parents and Emma used to take us for long walks up Trafton Road on sunny mornings. The park was so lively back then. Lots of people running on the big open fields, throwing balls, riding horses, eating popcorn and cotton candy, feeding ducks day-old bread on the big ponds. And the park concession stand used to sell these colorful windmill-like sticks that used to blow in the wind. Of course, those things would break by the end of every walk but that wasn’t a big deal. They only cost a few cents so there'd be a new one for the next trip to the park. But only if I behaved.

One particular Forest Park memory has stuck with me all these years and yesterday, that memory shot right to the top of my brain. Next to the building where they used to sell the Cokes and popcorn, there was an area where lots of older people used to gather to play shuffleboard. That particular section was always packed with people watching these seniors playing their games, one after the other. It's as though those folks played all day long, never tiring. And they always had serious looks on their faces, rarely paying attention to the spectators on the side. If I close my eyes even now, I can hear the clinking and clanking of those hard red and black 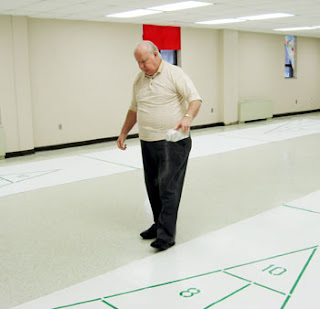 disks as they skidded and scratched along the dark gray concrete, smashing into one another.

“Getzov – You’re In!” - Bobbie Irwin is one of the directors of the senior program at the The Central Park Community Center in Topeka. This center is the Senior Games' Kansas affiliate and these state organizations have proven to be a great source of active and outspoken seniors for Eldercation interviews. I spoke with Bobbie last week while still in Oklahoma City and could tell right away she's one those folks that “gets it.” I was looking forward to meeting her and, at her suggestion, drove up from Wichita early last Thursday, braving some vicious early morning storms. I arrived at the center around 9:30, just in time to help Bobbie and Andrew, (that's Andrew up there, spreading out these tiny ball-bearing-like plastic pellets that allow the disks to slide easily on the plastic sheets), to set 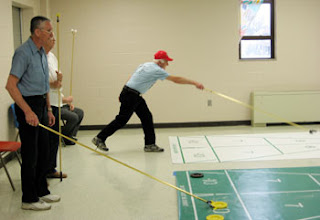 up for the daily tournament. I knew it was shuffleboard morning and Bobbie thought it would be a good way for me to introduce myself to some of the neighborhood's more active seniors. What I didn’t know was that I was going to be actually playing in the tournament. You know what? When they started pairing people off and I was introduced to my partner, Sandy – a smiling 70-year old woman – I have to admit I was a bit nervous. The last time I’d seen a shuffleboard … what do they call it? A Stick? Cue? Pole? Anyway, the last time I’d seen anything remotely having to do with shuffleboard was in Forest Park in the 1960’s. I did, however, follow a bit of the curling coverage during the past two Winter Olympic Games. Yes, yes, I’m one of those folks who actually enjoys curling. So take away the ice, the sweeping, 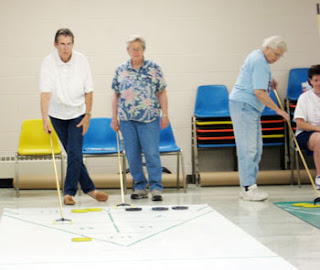 the circular layout and … well … it’s basically the same game. Sort of.

I loved it! I’m not kidding. And if people my age or younger ever took the time to play shuffleboard every once in awhile, my guess is they'd have a lot of fun, too. But, I'm not expecting that to happen any time soon.

Later that evening back in Wichita, I met an old friend of mine, Jill, and her husband and friend for dinner and I was telling them how much fun I had earlier that morning, playing shuffleboard, of all things. 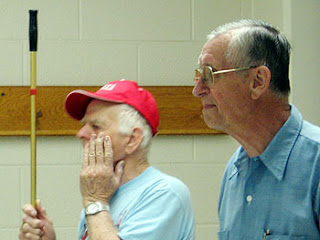 There was a pause. The next thing I knew both Jill and I were laughing pretty hard. I suppose I couldn’t believe what I was saying. And yet, it really was fun, I can’t deny it. Everybody in that shuffleboard room was doing their best to win games and you do find yourself knocking other people’s disks around and off the course – I learned quickly that’s one of the keys to the game, to keep your opponent from scoring. I suppose I wasn’t the gracious guest but, what the hell? It was funny to watch people kidding around with each other and I didn't escape their periodic needling. Being treated like one of the bunch felt nice, I have to say.

"The Circle Game" - Yesterday, while interviewing some people at Sedgwick Plaza in Wichita, one of the residents, Fran Lovell, handed me some papers with a few jokes 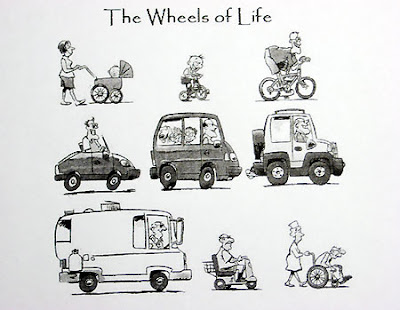 and funny cartoons he likes to pull from the web. One of them is to the right. Wheels. Circles. Cycles. There was a theme here. I smiled when I saw the cartoon. Sure, I'd seen drawings expressing a similar message, but this one hit me at just the right time, I suppose.

Immediately, my thoughts floated back to the prior morning up in Topeka and how much unexpected fun I had up there. As I packed up the car and started my drive back to the hotel I found my mind wandering and I thought about Forest Park, the windmills, popcorn and frosty Coca Colas’s. And then I thought about clinking shuffleboard disks.

And that’s when I heard Joni Mitchell's voice on the radio.

There are no accidents. That’s what they keep telling me.