Glad To Be Back - It's been awhile since I've posted on here - I know that. For those who've been following, there's a very simple reason for the absence. I've been finishing my book. Unlike some folks, I suppose, I seem to be at my best, writing-wise, only when I'm hyper-focused. So, that's what I've been doing. Hyperfocusing. And, apparently, that technique worked. Last weekend, I handed a finished first-draft of the book to my editor; I'm moving on to the next stage.

But, it's not as though my life stopped completely over the past couple of months. In some ways, my eyes have opened up to a number of things since I've lifted them up and away from the laptop screen. Months ... what am I saying? Years of transcribing interviews have taken their toll on my social life, as well as my upper back. But I'm pretty excited about what the upcoming year holds in store for Eldercation. Finally, I'll be able to share with many others, the value I've discovered from meeting so many incredible seniors from all over the country.

Now - on a completely different front - one of my recent "post-first draft" discoveries ...

A Teacher Is Born - About six months ago, a neighbor from down the hall asked me if I'd be interested in tutoring him. He's a young Korean gentleman (early 30's) and he wanted to improve his conversational English. "Expressions," he said. "You don't have to prepare too much. I just want to be more confident with my English speaking," he explained.

At the time, I was in the throws of meeting a deadline I'd agreed to with my editor, so I wasn't too keen on taking on a new venture, even though the young man was willing to pay me pretty well for a couple or hours a week. A few days, and then weeks, passed ... and then the idea kind of dissolved into thin air ...

... until Chin-Hwa moved out of the apartment building. (Note: the names have been changed to protect the innocent). When I ran into Chin-Hwa packing up in the hall, he was quick to bring up the tutoring idea again and, this time, with the book just about completed, I scribbled down my cell number on a slip of paper and asked him to call. "We'll figure something out," I assured him. Two weeks after that, I was walking into a new world to teach my first English class.

The Brightest Minds - As it turned out, Chin-Hwa asked if another friend could join in our "sessions," and knowing it would mean a bit more money for me, (along with some extra work), I told him I didn't mind. And so, Kazuo, (from Japan) joined Chin-Hwa and me at our first class - on a Friday night. We decided it would be best and 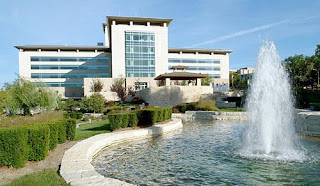 easiest for the three of us to simply meet at their building. Oh, yes ... their "building." I'm going to take a moment to fill you in on this "building."

Briefly, Chin-Hwa and Kazuo are both scientists. When Chin-Hwa first told me why he was in the U. S., I thought it was to go to school, so I had them both pegged as young students. Well, that's not the case. These are two very, very bright young men. And I mean young. Chin-Hwa is the veteran at 31. Kazuo is ... well ... I call him "Doogie Howser," since he finished medical school at the ripe age of 24. Amazing, huh? Chin-Hwa and Kazuo both work at The Stowers Institute For Medical Research. The one sentence explanation about this company is as follows: the institute "conducts basic research on how genes and proteins control fundamental processes in living cells." If it sounds intense, I can pretty much assure you that what goes on inside this building is, in fact, intense. (A full background sheet can be found at this link, if you're interested - Stowers Institute Fact Sheet).

I mention Stowers here, because apart from the teaching part of this experience which I'm about to describe - the overall immersion into ... how can I best put this? Another world? Every Friday night, from 7-9PM I enter a context that is so completely foreign to me, there's simply no other way to describe it. And I mean "foreign" in a few different ways.

First of all, it appears that 98% of all the scientists in the building come from other countries. I love this. Not many of them speak with me, but they all seem to smile a lot. The truth is, I really enjoy being around folks from so many different backgrounds. That's a genuine treat for me here and it's happening at a time when I feel myself missing NYC more and more, to be honest. I really miss that diversification. I don't miss it enough to move back, mind you. But, a few more months down the road?? Who knows?

Secondly, another reason the Stowers' setting feels so foreign to me is because ... well ... the last time I was around this many microscopes and petri dishes, I was busy failing out of blue biology in the 9th grade. Or was it the 10th? It doesn't matter. I didn't actually fail, but I probably should have failed, that's how completely lost I was that entire year. Looking back on it now, it didn't take long for me to figure out that I wasn't, what one would call, a "natural science" kinda guy. I'm definitely more of the "social scientist" variety. Having said that, the first time I walked down one of the Stowers' hallways with Chin-Hwa, I'm pretty sure my mouth was wide open the entire time. For moment I was back in Mr. McCullough's room 112, staring at the open body cavity of a dissected bullfrog.

Chin-Hwa showed me around a bit, taking me into his laboratory area and explaining about his particular research - which is fascinating, I have to say. More on that in a future post. In fact, I'm pretty sure I won't get into the "teaching English" part of the story today; just taking in the Stowers' surroundings affected me in ways I never imagined. I came to see very quickly that this is one very powerful place. For one thing, the security is impressive - I'm talking "lock-down" impressive. And for good reason, as one of the security guards explained to me while he initially signed me in.

That little tidbit of info really added another level to my whole tutoring adventure.