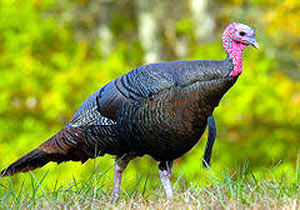 Unfortunately, I was so startled, I couldn't get my camera out of my bag fast enough. I was early for my visit with Marilee Howell and she lives in beautiful area, just about a mile outside of town. Isn't that great? One mile out of Columbia and this is what you see. So I passed a turn-off called "Rustic Road" on the way up to her house and thought I'd turn back for a look. How could I resist a name like that? I never get sick of pretty country roads. (I need to add the John Denver tune to my traveling songs).

I pulled over to check my map at one point and, (now the 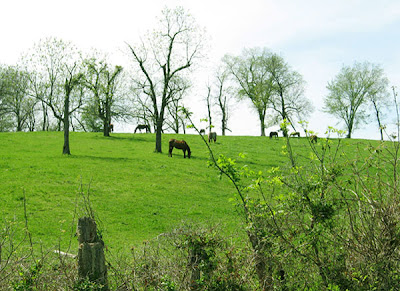 windows were down so I was exposed to everything outside), I heard this loud rustling and strange noises off to the right side of the car. Something darted back and forth and up and down, making a ruckus. I didn't know what it was but I have to say it was pretty loud. And when I turned my head I saw not one but two, what I'm pretty sure were, wild turkeys desperately trying to get over or through or around a mesh wire fence protecting the road. Apparently, they simply wanted to get back to the woods and away from my Hyndai. I watched them but, noticing how panicked they were - perhaps thinking I was from Shadybrook Farms - I moved the car a bit up the road. Of course, what they didn't know was that I was a nice Jewish boy from Western Mass. so the idea that there was a shot gun anywhere in sight... Anyway, I wish I could show you an actual shot of 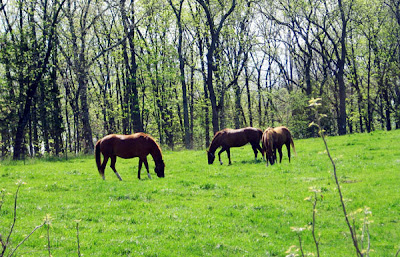 those two turkeys. They were pretty, colorful. And the more I write here, the more I have a craving for my mother's stuffing.

Now, I'm sure the country people out there are having a good chuckle about my getting excited about seeing two wild turkeys. But, you know what? It was kind of thrilling for me. Once I realized it wasn't a bear or mountain lion reaching through the window, that is. 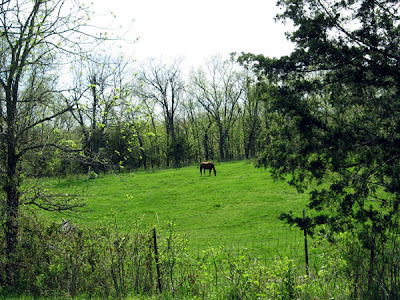 Black top turned to gravel and I kept driving. Here's a taste of some sights along "Rustic Road."

Columbia, MO - I had just unpacked after setting foot in Columbia when the phone rang. It was Russ Stott, the head of Missouri's state Senior Games, (one of the if not the largest Games in the U.S), and he asked what I was doing for dinner. The old HJ default would've said I was pooped from the drive and wanted to work on the website and all that. But you know what? It was time for a change so I agreed to meet Russ and his wife at a place called Chris McD's. 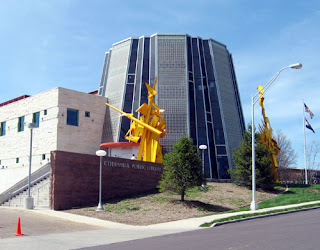 great and I had two bone-dry martini's - with extra olives, of course and, (2) I love Columbia, MO. What a beautiful town. It's pretty clear to me that whenever a city is built around university life, in this case, three major schools (University of Missouri, Stephens College and Columbia College), there's something special about the area's overall cultural climate. That's true about Columbia. And the 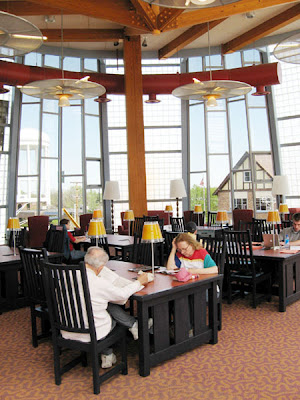 downtown is quaint, interesting and lively, with good places to stop and have a sandwich, sidewalk cafes and - how 'bout that library? Well ... another form of "Shangri-La" for me. Honestly, it's pretty much the nicest library I've ever seen. Of course, I know it's not on the level of 42nd Street and Fifth, but ... what the hell?

Paul Reid is another of the senior drivers I've met at Enterprise Car Rental and when he agreed to meet me for an interview, he suggested that we meet at the library - "The one with the big yellow thing in the front." (Paul told me there was a big town hullabaloo when they proposed to put the yellow sculpture in front. Personally, I kind of liked it). The librarians let you sign up for a small study room (two-hour slots) which provided a quiet space for me to sit with both Paul and his wife. And there's a nice little coffee/tea refreshment area downstairs as well. Some places inspire me to write; this was one of them.
Posted by H.J. Getzov at 7:25 AM