I love being on the radio! After watching Johnny and Kamal do their Jerky Boys' shtick on the air for over ten years, it was finally my turn to be the person “with the cans,” yesterday morning. I've been on the sidelines for hundreds, if not thousands of interviews and this morning, I 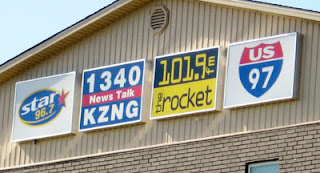 stepped to "the other side of the glass” as the FAN’s Steve Somers loves to say. Radio virgin no more. How did this happen? Kathy left a voice mail for me last week after setting up my West Shores' room – “I did something this morning and want to make sure you’re okay with it.” Her message intrigued me. When I checked in with her she told me she booked us on a local morning radio show – "The Doug Antoine Show,” - on "US-97." And, that was that.

"Good Morning, Hot Springs" - The only thing I’ll say is this: I have to have a radio show one day. I can’t tell you how natural it felt to be on the air and the idea that here we were, Doug asking me and Kathy questions about Eldercation and the words flowed so naturally and ... they were going out to … the world. Well, the world this morning may have not been all that large and I realize this wasn't Stern or Mancow. In fact, Doug kept joking after four listeners called in, that he had tapped out his listening audience. He joked about it but the fact is about eight people called me after the show to introduce me to prospective interviewees, so somebody in Arkansas was up and listening.

So I’ve got the bug now. Definitely got the bug now. It feels like people are incredibly interested in what I’m doing out here. They want to hear what these seniors are expressing, I’m sure of it.

The best thing is that Dick invited me back for another go-round tomorrow morning at 8:00. “Miss Missouri’s gonna be here,” he added, as if I needed a carrot to get me back. Still, that’s a 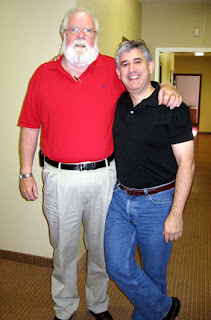 pretty nice carrot, huh? You think that’s another serendipitous moment? The fact that my next leg on the trip is taking me to Missouri?

Radio - Day 2 - This time I remembered to bring a camera so I could get some kind of record to add something to the site. I wanted you to see Dick as well - that's him up and to the left. You'll notice right away that he looks like a big Santa Claus with a thick white beard and mustache and white hair. Kathy joked yesterday that I could interview him, but that'll have to wait for another decade or so. He’s so easy to talk with so it follows that it would be easy to be a guest on his show. He has that knack for relaxing people, I can tell. And he seemed genuinely interested in Eldercation.

The reigning Miss Missouri is Sarah French and she was Doug's first guest of the morning. He asked Sarah to stay on for my segment and we had a great time chatting together and with callers about various subjects, the most current being the Don Imus fiasco. Sarah was nice enough to snap the photo of Dick and me but, of course, I forgot to have Dick take a shot of Sarah. I hope she doesn't mind me pointing folks to her site. That's Sarah (who, by the way, was born in Hot Springs, so she's a native daughter), on the right. She's interested in all kinds of "make a difference" causes as you can see by the Special Olympics shot on the right, so she connected immediately with my passion for seniors. As I move on up to Missouri, Sarah said she's going to email me to suggest a few folks to visit while I'm up north. Pretty timely, huh?

"You're always welcome on the show," Dick smiled as I shook his hand goodbye. Another friend, Steve Weisman up in Massachusetts has been active in the seniors radio arena, hosting an extraordinary show called, “A Touch of Grey” for many years. He has also written a number of terrific books about such issues as retirement planning, elder and estate planning and identity theft. I've always loved the title "A Touch of Grey" and Steve has asked me more than a few times to be a guest on the show when I’m back in New England. I'd love to do it. The fact is, after these past two days, I want to fly up there tomorrow! In due time, I'll be there.

Okay, so it’s down to Benton, Arkansas for a visit with a Mr. Jack Hubbard, another of Charley Baxter’s recommended interviewees. But before that, I’m having lunch with Gail Ezelle who is Arkansas’ Senior Games director. I’ve spoken with Gail a few times over the past few weeks, so I’m looking forward to meeting her in person. I have a feeling she's a great link to some good Hot Springs' contacts.
Posted by H.J. Getzov at 12:28 PM

I'm sure your friend in Massachusetts can interview you over the phone on Touch of Grey.