I can honestly say, I've never experienced anything like this. And it's having an effect on how I post things on the website - needing to move the push-pin from minute to minute. It's exhausting.

Kansas City, as most of you know, is 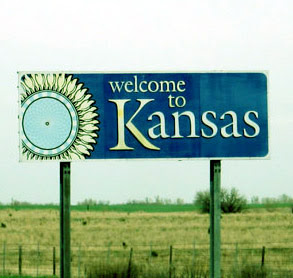 divided across two states, Kansas and Missouri. You can 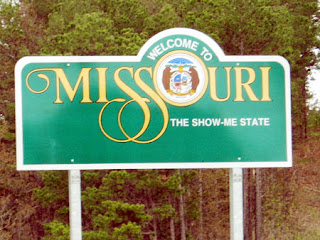 run errands on a Saturday morning and go back and forth from state to state as you check things off your list. I've been staying up in Overland Park at the ExtendedStay Hotel (Kansas) and heading down to yoga classes on 39th Street (Missouri), crossing over "State Line Road" about 1000 feet from the studio. The other day, I headed to Bed, Bath & Beyond (Kansas) to get some kitchen gadgets, then moved just down the street to Target and WalMart (Missouri) to pick up a few more items . I suppose it's no big deal, but I get a kick out of it - this being one city and all that. And it's funny, because after moving into my apartment - (which is great by the way - I hope some of you come to visit) - I've continued to tell people I live in Kansas, whenever they ask where I'm living. It just rolls off my tongue. "Kansas." After all, I live in Kansas City - not Missouri City. But with the spectre of buying a car, the other day I was walking in The Plaza and found myself looking at license plates for some reason. And that's when it hit me that I'd actually moved to Missouri - "The Show-Me State" - which works for me because I like those plates better.

Anyway, I suppose I'll have to change the photo in the upper left hand of the blog every now and then, depending upon what errands I have to run and where the stores are located.
Posted by H.J. Getzov at 7:33 PM