Minsky's Pizza. The people around here say it's pretty good so, of course, it was my duty to check it out. 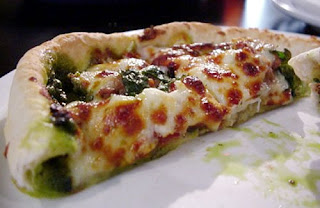 I'm still up in Overland Park, so I Googled "Minsky's" to see if there was a location near me, which there was. After finding it easily, thanks to MapQuest - I walked in and went up to the bar to take a look at the menu. There were about five TV's on - all playing the Mets/Yankees game (or Yankees/Mets game, if you prefer). After ordering a sandwich to go, I sat at the bar and had a beer, talking with two young guys, I'd say they were in their young 20's. Good kids. And baseball fans, to boot. Within a few seconds, after I reacted to a John Maine strikeout, the three of us started a good, solid baseball pow-wow; always a pleasure for me. Soon, the restaurant manager joined in the conversation, as did the young woman who took my order. As we talked, I kept one eye on the game, so I was pretty plugged into what was going on - pitch by pitch.

"The kid's good," I smiled. "I'm a bit surprised he's holding up," I added, referring to the young Yankees' pitcher, Tylar Clippard. This was his first major league game. What a way to start!? National TV, Mets/Yankees, the Yankees downward spiral reaching a level not seen in well over a decade now.

I think it was the third inning, no score yet and the first two mets had already made out, 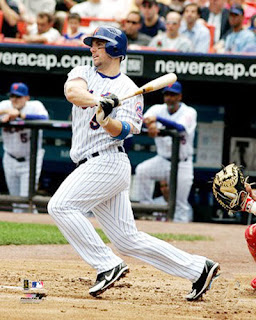 "He's hot," I smiled. "And they've already seen this kid now, one time around the batting order." The youngsters were listening now. I kept talking, analyzing, sipping my beer. Ball one. I took another sip. Ball two ...

"Watch this, now," I smiled, pointing to the screen. "Watch what happens."

"What're you talkin' about?" one of the guys asked.

I couldn't stop laughing. After about three seconds of complete silence everyone at the bar started to crack up.

Sure enough, Wright launched one ... and over the right center field fence, to boot. Not only had I called the home run on that pitch, but I also called the precise location, right down to the scratch marks on the outfield fence.

I think the funniest thing was the look on the two kids faces. Their mouths were open for about 15 seconds, but they weren't making any sounds. Finally, the one next to me spoke.

"That's pretty good," he said, his eyes still locked on the HDTV screen above the bar.

By then, my sandwich was ready. But I stayed for a few more at bats. The fact is I was joking when I called the home run. Well, sort of. That's what's great about baseball. It's really a thinking-man's game and, if you really pay attention, you can do your best to get into the heads of the players at any given moment. So that being the case, every once in a while, you know what? You get lucky. And you get to impress a few folks.

The stranger in the Kansas City pizza shop.
That guy who saw the future.

By the way - the sandwich?