Ralph Miller is an amazing man. Suffering from macular degeneration, it's tough for him to do many of the things he's done for years. Still, as he's done 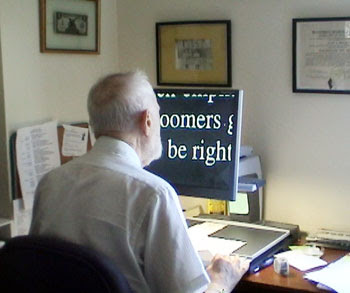 throughout his life, he's figured out ways to work around this latest challenge and he tackles his daily activities with a refreshing enthusiasm; it's inspiring to watch. When I visited with Ralph in his Montclair apartment home in Springfield, Missouri, he proudly showed me all the ins and outs of his enlargement machine as he read through some Eldercation background material I'd given to him prior to our visit. Pushing buttons, changing colors, making letters larger, smaller ... Ralph gave me a complete demonstration as I set up for our interview.

I loved hanging out with Ralph. A very creative person, he's written a great deal throughout his life as well as taken photos and published books about his travel adventures to over 20 different countries. Aside from his travel stories, Ralph expressed many things to me as we sat and chatted. But one thing, in particular, has really stuck with me since we met now over two months ago. Four simple words:

I loved the way Ralph paused after speaking the words, as if waiting for me to ask him what he meant. Which, of course, I did.

"You know, Harry," he smiled. "It's funny. I think every single accident I've ever been in was caused in one way or another because I was scurrying around, looking to do something quickly." And at that Ralph offerred a few stories about car wrecks, falls, spills - things that happened to him because he wasn't thinking clearly - all because he was stressed, frantic and in a rush to get somewhere.

I met with Ralph about six weeks ago.

And within a few seconds of ... well ... I'm not going to tell you how it happened. But right after the undisclosed act occurred, I swear I could see Ralph's smiling face. And those four words echoed in my head, along with the tooth chips.

This was perhaps one of the most stupid (there's no other word for it) things I've done in my life. (More stupid than faking getting mugged at Ryan Kweller's bar mitzvah 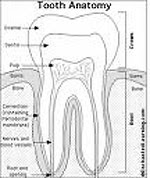 party. Now that's a pretty good story, let me tell you). It was stupid because it occurred solely because I was rushing to do something. And the fact is, there was absolutely no good reason why I should have been hurrying like that. It was a Saturday night and I didn't have much to do. I've been in KC for what? Four weeks? I know two, maybe three people, so it's not as though I was running late to get to a party or anything. But - rushing is precisely what I was doing and because of that, I wasn't thinking about my actions and ... well ... I now weigh about .00000004568394 ounces less than I did prior to my moronic act, having spit little white chunks of dental debris, my dental debris onto the brown carpet leading to my apartment door. When it happened, I swear it felt like a small gravel quarry emptied into my mouth. Seconds after it happened, as I approached my bathroom mirror, I was expecting to find five teeth missing.

Luckily, the cost of my stupidity wasn't all that great. And after waiting for the Memorial Day weekend to run its course, I was able to find a dentist (a very good dentist) down in Overland Park, thanks to my brother-in-law, the good Cantor Eric Lindenbaum.

"Do you think a synagogue will know where to find a dentist?" I laughed while speaking with Eric after he offered to call a Rabbi he knows at a local temple.

The good news: the teeth are fixed and I'm happy to be writing about it now knowing there is no root canal work scheduled for the immediate future. And the next time I find myself running, running, running ... I'll do my best to think about Ralph Miller, ahead of time. My teeth? From now on, they'll be used for three things and three things only: eating, brushing and flossing. The big three. That's it.