Putting It In Perspective

I’m glad I chose to make the trip again this year. It's always special to spend time with my family for the Jewish holidays. (If you're interested, I wrote about this experience years ago in 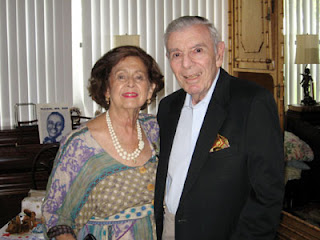 a piece called "What's Going On?") I don’t mean for this to sound morbid – and it’s not. It’s simply a fact that I don’t know how many more times I’ll be able to reach across to each side of my synagogue seat and hold my parents hands like I did yesterday. The days are numbered. Then again, haven’t they always been numbered? The same thoughts flit through my brain every time something exciting happens in a Mets’ game and I pick up the phone to check in with my Dad.

Every call starts with the same line. And I understand all too well that some day, there won’t be anyone on the other end of those calls. I know this. And as soon as I find myself getting sad at such a prospect, I catch myself and think, simply – "He's here now. They're here now." And I can cherish that fact ... now. The only time that matters.

Sure, sitting with my Mom and Dad in synagogue got me thinking about re-connecting with my Judaism. My presence in Kansas City, far away from family, has sometimes brought on an emptiness that's hard to ignore. And it's occurred to me that it might be good to pick myself up and head to a Friday night or Saturday morning service every now and then. Sitting and singing familiar songs and prayers 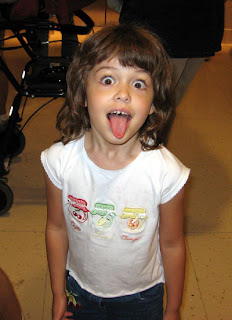 the other day – it was truly good and soothing for my soul. Not so much in an ultra-religious sense; that's not really my thing. More in the yoga, meditative sense. If that makes sense.

Once the day and fast came to a close, it was fun to walk outside the synagogue and grab some apple juice and honey cake with Adina and Yosi, my niece and nephew twins (that's Adina doing her thing to the left). What a joy to be able to see them, even if it is only every few weeks or so. And then it was time to head to my sister's for the 'break the fast.' The regular fare – bagels, lox, herring, and all the rugelach, babka and cake you can imagine. The highlight this year, as it is most years, was a noodle kugel (noodle pudding) my mom made. It had some kind of crumb topping on it and … well … let’s just say this wasn't for the faint of heart. And I mean that literally, in the artery-clogging sense. I think I had something like three helpings, complete with strawberries and sour cream to top it off. And that wasn’t even dessert!! It’s good to know these types of meals are treats only. I wouldn't last much longer if I ate that way all the time. 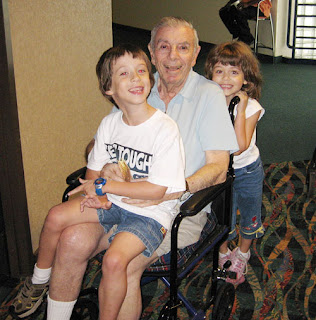 A Trying Time: Anyone who is a baseball fan out there and knows what’s going on in the National League these days understands what I’m about to write here. It is a tough time to be a Mets’ fan, let me tell you. Come to think of it. That’s a pretty stupid statement. It’s a much tougher time to be a Kansas City Royals' fan. Or a Pittsburgh Pirates' or Tampa Bay Devil Rays' fan. I say this because at least the Mets are in first place and they still may - I say may - be in the playoffs again this year. The idea that a couple of weeks ago this bunch had a 7 ½ game lead with only 17 games to play and now ... well ... for some unknown reason this team seems intent on blowing off the rest of their season. It's downright nerve wracking to be a helpless witness to this kind of train wreck. It's funny. When my sister mentioned three weeks ago that the Mets were going to be in town while I was in Florida, I thought, "Why not?" Who figured these games would even matter? I mean, who knew!?

The Perspective Thing: Fitting in with what I wrote above - How many more times will I be able to go to a baseball game with my Mom and Dad? Both Brooklyn natives, long time Dodger fans - these are the folks who introduced me to this wonderful game. My father is the one 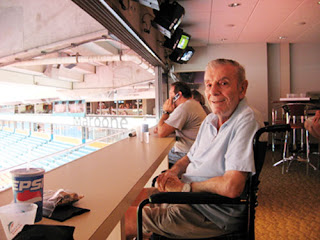 who took my sister and me out of school that crisp autumn day in 1969 to drive to NYC to see a baseball game. But not just any game. It was the final game of the the '69 World Series. The day the Mets became the most unlikely of World Champions by beating the big, bad Baltimore Orioles. I was there. I still have an original program, complete with my dads’ scoring of the entire game. Talk about a cherished memory.

So, to hell with un-nerving pennant race and the mental breakdown of my favorite team. And, believe me, the game ended up being quite the un-nerving adventure. The Mets/Marlins game, the Florida trip - it was all about being with my family. It was about another Yom Kippur; a belly full of bagels, lox and noodle kugel; a tough Mets' win and a chance to run the bases in a major league ball park with the most lovable twins in the world.

That’s what this was all about.

Thanks again Harry for sharing some of your life and family with us.
Extend to your family our best wishes and good health.
We admire your writing skills.