A Little Bit Of Everything - Part I

8 months.
Hard to believe.
It's been 8 months since I was looking out the plane window, staring at steel beams and a concrete foundation; the beginning stages of what will one day be the Mets' new 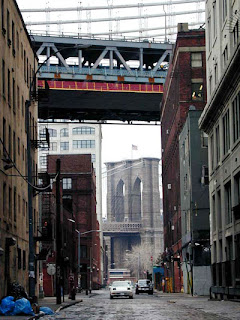 home - Citi Field. 8 months since I was staring at a Wichita Airport baggage claim belt moving from left to right, cracked and squeaking, my baggage nowhere to be found on it. What I didn't know at the time was that my luggage had never actually been loaded onto the plane that day and it was still sitting back in Atlanta, waiting to catch up with me. What a way to start the trip of a lifetime.

More or less settled into Kansas City for the next year at a minimum, I've been keeping a list of things I need here - little things. Items packed away in my NYC, Dumbo storage locker - ("Dumbo" = "down under Manhattan Bridge overpass," by the way). Add to that, I haven't seen my Emma for ... well ... it's been too long. Add these two things together and one thing became quite clear: it was time for a trip back East.

The People You Meet: It's what drives me. Some like to jump from planes; some enjoy scaling mountain peaks; others enjoy diving into the ocean's depths. For me, it's all about meeting people. The idea that I can wake up in the morning and have no idea that 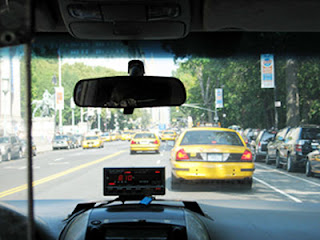 I'll be meeting ... hmmm ... a woman named, "Irene," (pronounced "Irayna" - with the swallowed "r" sound). Irene is from Denmark. Interestingly, I first noticed her as I made my way into the gate waiting area at 5:30 AM - I was half asleep and it's a wonder I was able to make the half hour drive to KCI airport. Still, a cute young lady always catches my eye, so that's that. 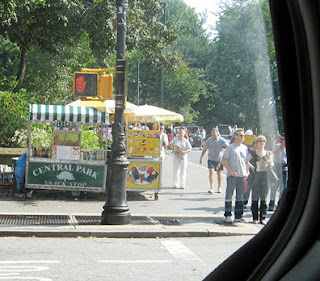 The funny thing is, she ended up sitting in front of me for the entire 2 1/2 hour trip and we didn't say a word to one another until the deplane beep sounded and we stood up to remove our bags from the overhead compartment. A quick "Do you live in NY/KC?" conversation turned into a stroll to the baggage claim (my bags were there, thank you) ... which then led to another walk to the taxi stand ... which led me to do what would have been the unthinkable for me years ago.

And that was that. Again.

Irene and I sat and talked about all kinds of things for almost two hours. In no rush to get to 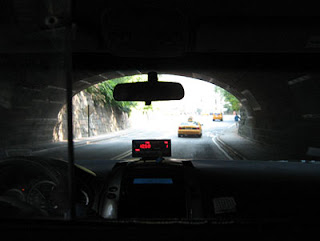 Howard's and with Irene stuck at the airport until her evening flight to Denmark was due to leave, it was simply the thing to do. A new girlfriend? Hardly. A huge age difference and a boyfriend waiting for her at home - two things that, in the past, might have caused me to avoid the "How 'bout a coffee?" question - made such a notion impossible. Still, none of that stuff matters. I just know I had a great time hanging out with Irene at Newark Airport. And, as I've already pointed out twice before - that was that.

The cab ride into the city inspired me to snap a few photos - it was good to see New York. As I've written before, I love the place but also despise it. NYC inspires extreme feelings, as least for me it does. It was good to be back in a familiar place, extreme feelings and all.

Autumn In New York - 90 Degrees?: Who really knows what this is about? All I'll say is, the NYC 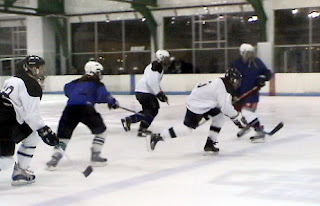 hate factor kicks in when it's hot and humid this way in the city. Solution? A friend who plays in a hockey league. An ice hockey league. Luckily, I have such a friend in Howard.

The night before I headed East I had an idea about shooting some video of Howard playing his favorite sport. He's been such a good friend, allowing me to crash at his place - I wanted to give something back, so ... 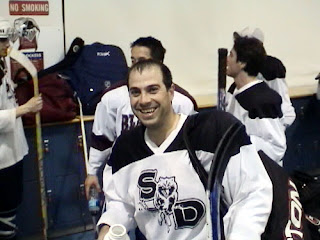 It was nice and cool, actually, a bit cold in the Chelsea Pier's Skyrink but, trust me, I wasn't complaining. Here are a couple shots of Howard in action. Great game; an overtime 4-3 win. Or was it 5-4? It doesn't matter - The Sled Dogs won and that's the important thing. For some reason, whenever I watch an SD's game, it always ends up being exciting and, the Sled Dogs usually pull out a win. Go figure. Perhaps I'm their good luck charm.

The first night back ended up with me joining the team at their local hangout. A couple of beers, chicken tenders and French fries later, it was time to head back uptown. The 4:08 AM wakeup time was starting to take its toll on me.

And Sunday meant an early morning appointment with my Dumbo storage bin.
Posted by H.J. Getzov at 8:52 AM