I've been hearing the sound for the past month or so. For the most part, it sounded very familiar - that sound. The first time I heard it, I pretty much figured it was cicadas. But not just cicadas. I'm talking cicada's gone wild. The thing is I couldn't be absolutely sure what I was hearing simply because it wasn't the sound I was used to. It was different from the cicada 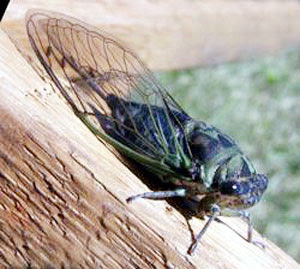 sound from back east. Up in Massachusetts, the sound would come more in bursts, lasting for about 10 seconds or so, followed by a nice, slow, release until there was silence. I loved that slow drop off in tone and melody. That's the pattern I remember from when I was a kid. Hot summer days, bumble bees, Kool-Aid, the Good Humor man, sprinkler-jumping and ... that sound. That comforting sound.

But, this sound - the one I've been hearing every night for the past month ... This has been different. First of all, it is loud. I mean really, really loud. If it is cicadas, there must be hundreds, what am I talking about? Billions - even trillions of them. And the thing that's most striking is that it simply does not let up. These cicadas, if they are, in fact, cicada's - they just don't know how to let up like their New England counterparts.

It's Research Time - Part of my pleasant Heather visitation week included more than a few long walks together around the neighborhood, topped off by several laps 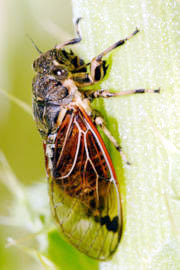 around the gorgeous Loose Park. It didn't take long for the conversation to turn to "that sound."

"Have you ever heard anything like it?" I'd laugh. "The thing is, it's probably coming to the end of their run now." The long hot summer (there were more than a few triple digit temperature days here during July-August) is winding down, although it's still pretty hot on some days, even midway through September. From all indications, the cicadas are reaching the end of their life-cycle. That theory has, in fact, been confirmed by the spotting of a few carcasses on the park pathway - they're growing in number each day.

The sounds and carcasses, coupled with my bug conversations - you know what? It was time for a Wikipedia visit. It was time to find out more than any person would want to know about - the marvelous cicada.

"Cicada-Mania" - What did we do before the web? I mean, it really is like having a public library at your fingertips, every second of the day. Did you know, for example. that there are over 2500 species of cicadas all over the world? And the sounds they produce (males only) are as plentiful as the number of different species. Also, did you know that the sound they create 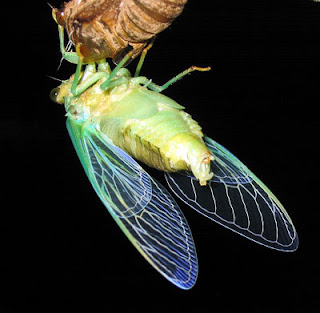 (called a "song") is known to be among the loudest of all sounds made by any insect? (FYI - for everything you'd ever want to know about cicadas, feel free to check out this Wikipedia link). Don't worry, I'm not going to spend the next half hour feeding you all kinds of cicada knowledge. Still, I found it interesting to find out how these creatures actually make that "sound." For the most part, they do it to ward off birds or, how is it phrased? Their "avian predators."

You know what? Now that I know why they're making the sound, the racket doesn't seem to bother me as much. Of course, that could have something to do with the fact that there's been about an 80% drop off in soundage over the past few weeks. Still, if I were a cicada, I'd be rubbing my timbals pretty frantically to prevent my being swiped off a treetop and carried away, trapped in the grip of a strong beak. (By the way, that shot to the right and up - he's from Metuchen - for all my New Jersey friends).

Anyway. That's my cicada shpiel. But, before I sign off today, I'll add just this. Wikipedia is one thing. As always, that site gives the user a good solid "101" basic knowledge infusion of just about any subject in the world. However, my absolute favorite cicada finding is this site, aptly named - "Cicadamania.com" If you're not squeamish about such things, this is a must visit. The best feature? Check out the u-tube movies of cicadas in action. Since most of us aren't able to climb trees at a moment's notice (and I'm not sure the cicada's would enjoy our moving into their territory like that - birds are enough for them to think about, let alone crazy humans with camcorders), these short videos are pretty remarkable in that you have a chance to see the facts behind the mystery sound. Sort of "Cicada's - The Untold Story." I'm hoping this link will work - here is one video sample: http://www.youtube.com/watch?v=Hp3RcoUNILo - the poster isn't exactly sure what the hell is going on here, by the way. Also, the photo on the left gives you a glimpse of the cicada's moulting process, giving new meaning to the phrase, "slips into a nearby phone booth."

So now, whenever I'm walking around on a hot summer day, no matter where I am in the world and no matter what variety of cicada is doing it's thing, I'll have a idea about what's really going on up in those trees. And I'll be rooting for those guys in their quest to avoid their avian predators.

Here's to the cicada.

Come to think of it. It's too quiet around here these days.
Posted by H.J. Getzov at 9:30 PM