The Birth of Walmart

A Visit With Fred - I can’t remember ever doing four interviews in one day but there's always a first time and today was it. The day started off with an early morning drive north up to Kingfisher. As I've said about 50 times already, I always get excited making preparations to travel into new territory and this morning was no exception. I filled the car with $2.47 gas and headed up Northwest Expressway - straight shot, pretty uneventful for the most part. And yet, about ten miles up the road, the streetlights and buildings thinned out and things opened up to wide open farm country. Dark cows dotted the open grass, heads down, hardly moving. A few silos dotted the landscape and there were these huge bundles of rolled up hay scattered across the fields. It was striking, the endlessness of it all, although I felt like I was only getting a 50% show because of a thick grayish morning haze.

The reason for the Kingfisher visit: Fred Schemmer. He's 89, a former farmer or shall I just say - 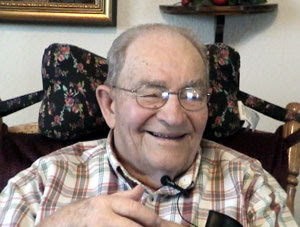 a farmer. Fred still works the land, driving a tractor for a friend and he works hard, let me tell you. We had a great visit, Fred in his rocking chair, moving back and forth, peering through his glasses, me sitting across from him in his living room, easy listening music serenading us in the background on his cable TV. At times things got a bit teary. Fred lost his wife of 50+ years about ten months ago and he’s having a tough time. Still, he was so wonderfully open about it and not afraid to express his feelings. He and Jaynie had a special relationship so to say he has a huge hole in his life would be an understatement. But another love has come to Fred's rescue - farming - and it's certainly lending him a hand at coping 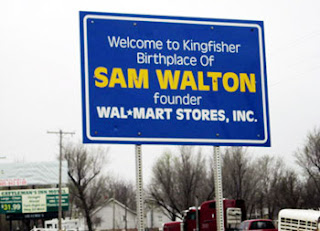 with his sadness. (Again, I’m limiting my writing about the seniors I visit here. Feel free to check out the “Tapping The Resource” section of the main site at a later time. I’m working on it.)

The Birth Of Walmart - Fred walked me outside to the car and I remembered to ask him about something I noticed on the way up to Kingfisher. Just before I took the left off the highway to head up to Fred’s home, I noticed a particular sign. Fred chuckled and, of course, gave me the complete lowdown about Sam Walton, which included a quick and complete Kingfisher history lesson. He suggested that I take a drive around town, which I did. The Walmart 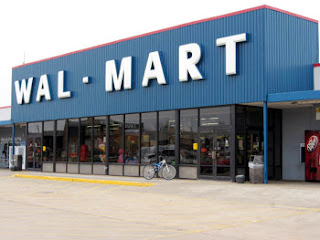 … well … look at it. If it isn't the first Walmart ever, it’s certainly close. It reminded me of one of those old time Woolworth stores. Fred told me it's one of the original stores, been there for many years but things are about to change. Kingfisher's about to enter the big time. A huge area of farmland has already been cleared for the construction of a major new shopping center area, the centerpiece of which is going to be … you guessed it. And why not? It’s Sam’s home town.

America's Drive-In - Quick observation. I meant to mention this a few days back. Have you ever heard of Sonic? You know, America’s Drive In? (Howard, I know you’re

a Sonic veteran, but it's certainly no Duchess). Seriously, I’d seen a commercial now and then when living in the city, but never actually come across an actual Sonic. Well, those days are over. Now, here’s the thing. I must see a Sonic - and this is not an exaggeration - every 200 yards here in OKC. I’ve never seen anything like it. It’s rivals the Starbuck's frequency in NYC. I ask you, how can they all survive? It’s like each square mile of Oklahoma has it’s own Sonic. That means a lot of folks here are eating a hell of a lot of burgers and cheddar bites and downing a bunch of banana-pudding shakes.
And yes, I tried a Sonic.
Once.
Enough said.
Now I can check that off my list.
Posted by H.J. Getzov at 9:44 PM