The ultimate Eldercation treat for me is when I'm able to spend time with participants beyond the 30-minute interview time. Often ... in fact, quite often, I'm invited to have a piece of cake, some tea and more often than you'd think, I'm invited to share a meal with them. And when that happens I'm always frustrated I don't have the camera running because that's when a bit of magic often strikes. Sometimes, if I'm extremely lucky, I get to 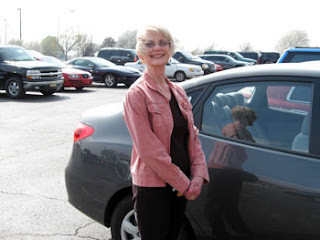 spend a entire afternoon with an interviewee. That's what happened Sunday.

Billie Beal was the first of my interviews set up by Doug Paulson at the Woodside Senior Center. She was the one with the ginger on her hands as she was backing a gingerbread cake in the center's kitchen. We had talked a few times after the interview as Billie was helping to introduce me to other people for the project. "How would you like to see the University of Oklahoma?" she asked two days ago. Having grown up watching the Sooners and hearing about the school all my life and wanting to see more of the area, of course I accepted. But that wasn't to be the real surprise of the day. 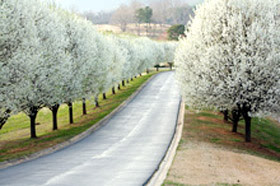 The university is located in Norman, OK, just southeast of OKC center and Billie took side roads to get there. It’s amazing to me how there are such wide open spans of land so close to a major city like that. “What a great time for you to be here,” Billie said. "Everything's blooming." I asked what the white, round trees were? I've seen them 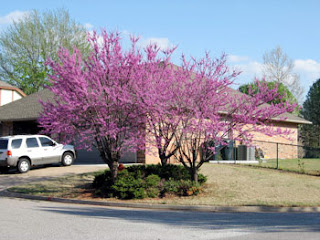 everywhere and first noticed them on the drive up to Kingfisher, it's entire main street lined with them. "Bradford Pears," Billie explained. "And those pretty reddish-pink ones you see all over... Oklahoma Redbuds. The state tree."

You can tell everything's about to pop, bloom-wise, with the rain and warmer weather coming. I'll be sure to have my camera ready to go. The red and white blossoms remind me a lot of the trees around the Central Park reservoir, when they're in bloom around the east, southeast side of the running and horse paths. It’s one of my favorite times to run there, in the early morning, blossoms dropping on the path like snow. It’s about a three day window to catch it just right, but when you do ... man, it’s beatufiul. And the smell? Nothing like it. For a split second that aroma actually wins the battle against the car fumes.

After a great brunch at a restaurant called "Legends," (they have something called Coca-Cola cake there. And, yes, my will power was intact Sunday morning), it was time for the treat of the day. It turns out, a young man named Deke Arndt from The National Weather Center came over to the Woodson Center last week to give a workshop about the facility. Billie told Deke she was taking me on a short tour of the OK campus on Sunday and asked if the Center was open for tours. Now get this - even though the center is 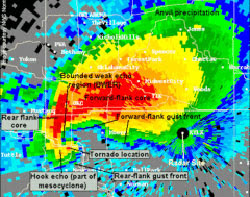 closed Sundays, Deke said he’d open it up to take us on a private tour. How do you like that?

Now, I'm not ashamed to say I am truly a weather-geek. Given the opportunity and resources, I definitely have the "storm chaser" thing running through me. Severe thunder storms, tornados, you name it, the whole thing gets me going. So I knew this was going to be fun. And it was. So now, whenever I watch TV weather forecasts and they tell me 1.2 inches of rain fell in Central Park or downtown Boston, I’ll know exactly how that number is calculated. Deke took us to a special room where rain gauges and other technical equipment are sent for repair and he showed us how different items work. Perhaps this would make normal people yawn, but Billie and I certainly asked a lot of questions. And even though most of the facility's areas were closed for the weekend, Deke still was able to put together a great tour. For me, the highlight took place in a video presentation room where Deke pulled up some video graphics of the monstrous F5 tornado that ran though Oklahoma in 1999, as well as and the huge ice storm that pummeled the state this past October. He explained different symbols and gave us an in depth look at how storms are tracked at the center.

After the tour, we drove around the beautiful University of Oklahoma campus. Of course, my eyes were drawn to the football stadium which is as impressive as I figured it would be. Years of following 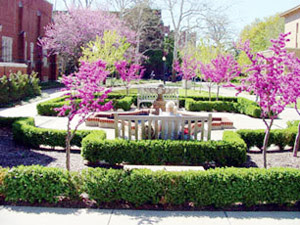 Barry Switzer, Billie Sims and the Sooners, it was cool to see the great football tradition's ground-zero. It's then that it dawned on me that I didn't know what a "sooner" was, so I asked Billie. She explained it to me and then I Googled it when I got back to the room. So, if you're the least bit interested:

"Sooners were persons who illegally entered certain lands in the Indian Territory prior to the date set by the U.S. government for the opening of the lands to settlement. The term was first used in connection with the settlement of the so-called Oklahoma Lands in 1889. A proclamation issued by President Benjamin Harrison authorized settlement of these lands as of noon, 22 April, and forbade any person to enter them earlier. Those who did so came to be called "Sooners." (http://www.answers.com/topic/sooner)
And that was my Sunday. Taken together with yesterday’s trip up to Guthrie and then lunch at the Cattlemen’s with Kathy Jo, it was a pretty damn good weekend, I have to say. There’s something pretty special about coming into a state where I’ve never been, meeting people in all kinds of different ways, and then getting to know them while seeing the area. It’s certainly beats a simple guide book.
Posted by H.J. Getzov at 8:44 PM

Hi Harry, it was great to meet you and I hope you have enjoyed your time in Oklahoma.

May the rest of your travels be safe and rewarding.

Hey Deke -
I can't thank you enough for last Sunday. You could probably tell how much I loved the tour, as did Billie. In addition, I was inspired by your story and wish you every success on your new path. I KNOW you're going to be great at it.
All the best,
Harry