"Choo-Choo" - When I was little, my parents bought a train set for our basement playroom. It was, I don't know, about eight feet long? Five feet wide? Or, maybe it was ten feet long. I

haven't seen it for years so my guess is, if I looked at it today, it might very well be only about one by two feet. I'll tell you one thing, to a four year old it pretty much looked like a NYC block. It was big, brown, with long green stretches that looked like open prairie. The first time I saw that set, it was the most exciting thing I'd ever seen.

We had Lionel trains. There were two engines - 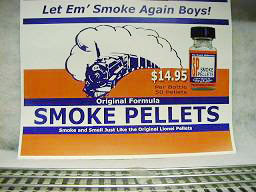 one was the old fashioned type of, I guess you'd call it a choo-choo train; the kind that tugged a long series of freight cars, with it's bright red caboose pulling up the rear. That engine was black, (it looked a lot like the one above), with that silver metal bar-like post attached to the wheels, the one that moved up, down and around as the wheels spun. I always liked that motion for some reason. That engine made a whistling noise and I have to tell you - it sounded just like a real train. It was wild. I remember one day, my dad showed up holding a little box filled with tiny white tablets, which you placed in the similarly tiny smokestack at the train's front. As the engine heated up from the

electricity flowing through the tracks, a thin white wisp of smoke streamed from the engine. The whistling, the smoke, that silver bar moving up and down - I was in heaven.

The other engine was a more modern, "Amtrak," type of machine and this train pulled passenger cars like the one down below. I loved the sleek, silver, rectangular look of these trains and the way the passenger car windows would

light up, showing off the tiny profiles of people as they chatted with one another and enjoyed their meals in the dining car, (you can see this on the train to the right). Well, I'm figuring that's what those folks were doing and I could have sworn I always saw my Nana Ann in there whenever we took the trains out for a spin. Back in the late 60's, we used to go and pick up Nana at the Springfield, Massachusetts train station, so it didn't take much for my imagination to simply transfer that experience over to our toy basement set. 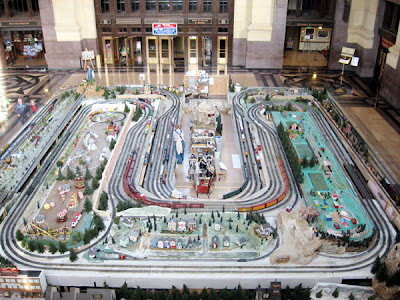 I used to love heading down to the basement to play engineer. And there was nothing better than running both trains at once and turning off the lights for the complete night-time experience. The sounds, the smoke, the lights of the little plastic towns complete with gas stations, cars and people ... there was even a little helicopter somewhere on the open prairie. I'm not sure that really fit in well with the set, but that didn't matter. It was still exciting to have it there. Sure, I my siblings and I were mere observers in the early years; my Dad was chief engineer and we were instructed to stay clear of the set when my parents weren't around. The 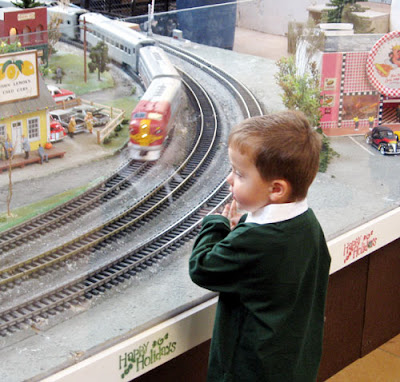 electricity was too dangerous, I suppose. But, years later, it was time for my sister and me to take over the controls and then it was my brother's turn after that. So many times I would head downstairs and get lost in that little Lionel world. It was relaxing - I can remember that feeling. And yes, sometimes, the "boy" in me would take over. I remember sometimes speeding up the trains so much, that they'd take off and fly from the tracks. But as you might imagine, after 15 crashes or so, there wasn't a whole hell of a lot of mystery in the accident scene. You 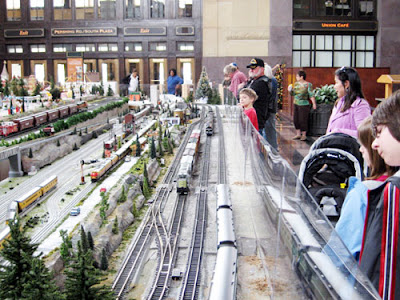 should know, however, that I never purposely crashed the passenger train. All tragedies were reserved solely for the coal, flatbed and general freight cars. No lives were ever lost in that basement. After all, how could I ever hurt my Nana Ann?

Take A Look At This - Well ... if my eyes popped out of my head when I was 4 looking at my Lionel basement set, I can't imagine what it must be like for 4-year old encountering what you see here. To me this 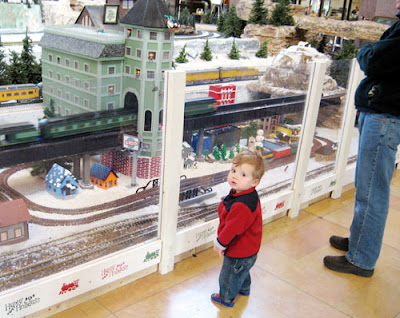 was, perhaps, the biggest - I guess you'd call it a "train set" - I had ever seen. It's actually a collection, an association ... a train set conglomerate. I wrote a bit about seeing this a few posts ago when I had wandered down to Union Station and met a few model train hobbyists as they were setting up this beauty. (See above - you have to look carefully to see the people in the photo and this will give you a better sense of the scale of the project).

Well, it's finished now - completely set up. I snapped off a few photos so you can see what I'm talking about but, to tell you the truth, there was no way to get a good shot of what I'm talking about here. My little Canon digital isn't set up to give you the full flavor. It was one thing to see the people setting up the train early one weekday morning with just a few people milling around the station. It was something else to see the system fully up and running, with kids running around the outside boundary, putting their little hands up to the glass, mouths open, eyes as wide as ... well ... I'm guessing that's what my eyes looked like the first time I saw that basement train set.
Posted by H.J. Getzov at 8:55 AM

Wow! What a great post. Thanks for taking us all back a few days in our "rememberer". I had a wind up train. Track about a yard long and two feet wide. But I enjoyed it as much as if it were real. Wonder where all those things went?
However, you answered that question.......they live still in our memories.
Hollis