I don’t like to admit it, but war fascinates me. I love learning about it, seeing paintings and photographs of it, reading first-hand accounts of it. The Civil War ... now that's always sucked me in. I don’t know. For me, there's something kind of ... well … eerie about that period. Maybe that's because it's the first time mankind was able to see actual images of war's horrors. Photos of mangled, contorted bodies lying dead in the open fields. Of makeshift hospitals with all the surgery paraphernalia - saws, ether, white metal beds ... It all gives me the creeps. On the edge of the industrial revolution, The Civil War seemed to change everything about the way wars were fought and followed. Until, that is, the next war came 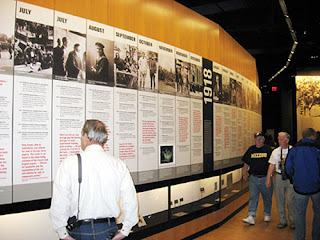 along. And then, the next. It seems all wars change everything. And yet, they change nothing.

"The War To End All Wars" - Last week, I happened to see something in the paper about the The National World War I Museum, At The Liberty Memorial being located right here in Kansas City. I hadn't heard much about it and, in fact, haven't thought much about WWI for a long time now. It's funny how that particular conflict is overshadowed by it's world war cousin. Anyway, when my friend Mary mentioned something about Willam Jewell College presenting a special alumni lecture, followed by a tour of the museum on Saturday, I thought it would be fun to join her. I was meaning to head back down to Union Station anyway, so I thought this would be a great way to kick off the weekend. And you know what? It was.

The lecture was held in a large loft area upstairs at Union Station and the guest speaker was Dr. Thomas Howell, a renowned World War I scholar. Dr. Howell 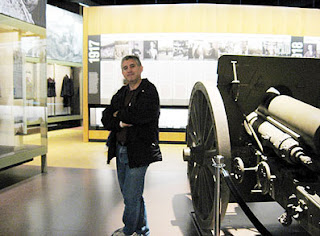 presented the information in an almost poetic way and his - I'll call it a pre-museum briefing - was the perfect appetizer to the main meal. By the time we entered the museum, I felt like we had traveled back in time, our heads filled with fresh knowledge about the early 1900 European social, cultural and political climate. What did Dr. Howell call it? A tinderbox?

Okay. So I've seen three museums since I've been here: The Nelson Atkins Museum Of Art, including the new Henry Bloch wing; The Arabia Steamboat Museum; and The Negro Leagues Baseball Museum. I can't remember the last time I spent so much time in museums. I know part of the reason is my newness to the area. But I'm sure another factor has something to do with my lack of a television; I chose to not get one when I moved into my new place.

Anyway, the World War I Museum is an 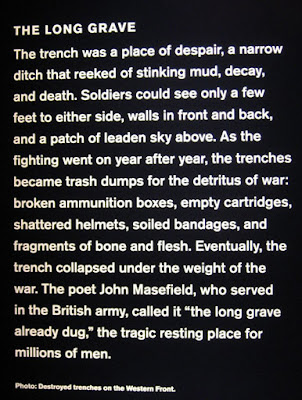 incredible place. And I don't like tossing around the word "incredible" too much. As Dr. Howell suggested to us during his lecture, this is a world-class museum in the truest sense. The displays, interactive materials, educational copy and media ... it's a tremendous collection. I know I have to go back at some point since it's too much to take in on a first visit. There is one section, which is kind of like a wide balcony area, where you can either sit or stand while you watch a short movie presentation about the U.S. entry into the conflict and how that shift affected the war's outcome. The balcony overlooks a huge replica of a trench and it looks remarkably realistic, complete with the mud and water. I don't usually take photographs of copy but the description to the right caught my eye, (you can click on it so see the words more clearly).

Of course, it was good to tag along with Dr. Howell every now and then, so we could get our questions answered immediately by the expert. And, to be at the museum over Veteran's Day weekend was something special as well. Crowded, to be sure. But still special. I don’t actually remember the last time I even thought about the first world war. I took two courses about the second war when I was in college and they only touched a little bit on WWI. 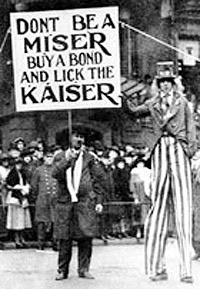 But after listening to Dr. Howell and then to the movies; after reading and viewing the various displays - a lot of the history came back to me. The Serb issue, The Black Hand, Hitler's capitalizing on Germany's disgraceful defeat, sowing the seeds for the coming turmoil... It's
interesting to think that people back in 1918 actually did believe that the phrase, "the war to end all wars" was appropriate.

If you live in Kansas City and you haven't been to this museum, you owe it to yourself to check it out. It's a must-see - a truly extraordinary experience. Not that you’re all traveling to KC, but if you do get here at some point, I recommend some trips to the museums I mentioned earlier (and I haven't even seen the Truman Presidential Library yet - I heart that's great, too). And when you're through exercising the mind, stuffing it with all kinds of information, you've earned the right to check out the barbecue spots.

Have I mentioned how much I love barbecue?