For months now, I've headed into new states, cites, neighborhoods and, as a side-attraction to the interview process, I've had fun checking out different places 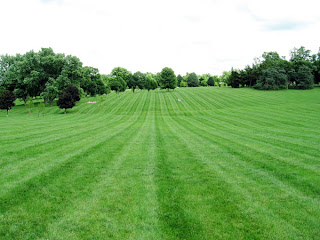 and people wherever I traveled. I love doing that type of thing. Always have. Now, of course, I'm staying put for a bit, so when I drive around and see new things, I know it's not as though I'm going to be heading off into the sunset in two weeks. This is home. At least for the next year. And that feels good after four months of being on the 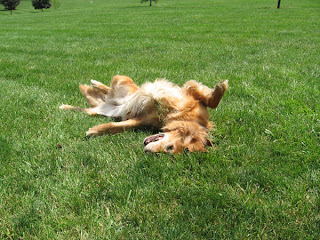 Last week, I had a chance to take a breath and start to really look around at my new area. One morning after yoga class, I headed south to check out some furniture being stored at an ExtendedStay hotel. Get this. Again, under the category, "It doesn't hurt to ask," I figured I'd put it out there and ask some ExtendedStay people what they did with older 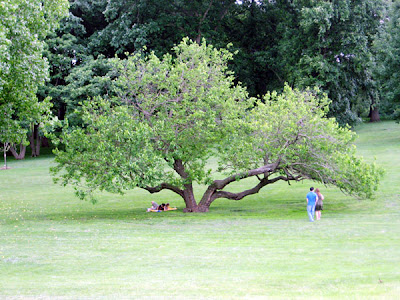 furniture when it was time to remodel their properties. And, once again, my pal Val went beyond the call of duty by hooking me up with some small pieces I can definitely use. So now it's as though I'm still staying at ExtendedStay!

Last weekend, once I was able to get the furniture up to the apartment, Aliya called and asked if I wanted to head out to the park with her and Sarah, her golden retriever. 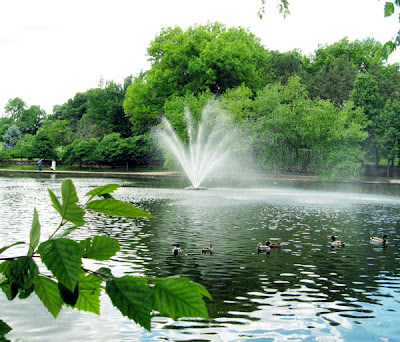 The day was gorgeous and I figured it really was time to relax for a bit after two weeks of securing an apartment and buying a car. I was really tired.

The park is called Loose Park, and it's up a hill and behind where I live, about a five minute walk, if that much. It's nice to know I have a place to head when my spirit calls for a walk among the trees. That's the way I felt about having Central Park directly across the street in the city. Listen, I know it's not the same thing. But you know what? It's nice to be able to walk and not be barraged with fumes and noise. Is it the same? No way. I miss the stimuli of seeing different people, story after story unfolding 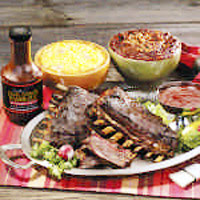 before my eyes. It's that love-hate thing operating again. I suppose some days I'll love the quiet. And other days, I'll miss the noise. One thing is for sure - I'll never miss the fumes. Check out the quick shots above. 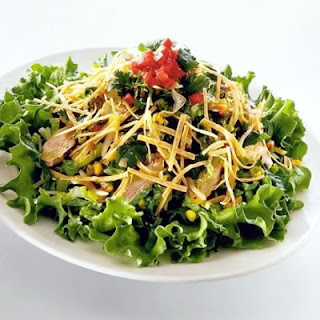 No Fear of Starving: What a nice area I live in. Not only is The Cheesecake Factory right across the street but I just found out there's one of the city's best barbecue places right next to The Cheesecake Factory. It's called Fiorella's Jack Stack Barbecue and, although I haven't eaten there yet, I did manage to stop by to get a menu. Trying to clean up my act with better eating and consistent yoga again - I know I have a future at Jack Stack but will choose my moments carefully and less often. I'm guessing my rib rendezvous will be happening when my brother hits town. Just a guess.
Posted by H.J. Getzov at 8:32 PM