I love "Iron Chef" and always wanted to see one of the competitions live. I just didn't think it was going to happen in Kansas City and at a retirement community, no less. But, that's what I 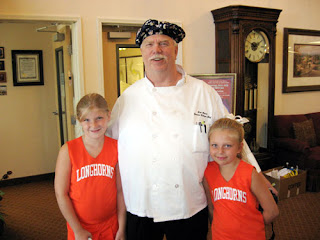 did the other day. A new friend, Mary Jane, is the activity director at an independent living community - Garden Village. As my blog readers already know, I went up there the other day for lunch, but Mary Jane called the very next day and suggested I join a Garden Village troupe to see an Iron Chef competition. Naively, and I'm almost embarrassed to say this, I actually thought I was seeing a regional competition for the actual Iron Chef TV show on The Food Network. You know, where the best of the best get to go wisk to wisk with the likes of Mario Batali and Bobby Flay. Well ... that's not exactly what I was heading to 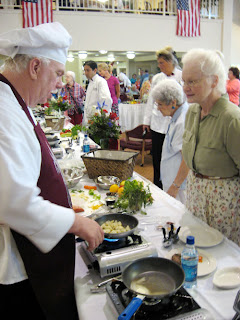 see, but it was close.

When I arrived at Garden Village, I heard a voice from above as I walked through the door. It was Mary Jane coming down one of the sets of the building's long white stone stairways. The place is one of the prettiest retirement communities I've seen while on the Eldercation road. Within a few seconds, two wide-eyed, pretty little 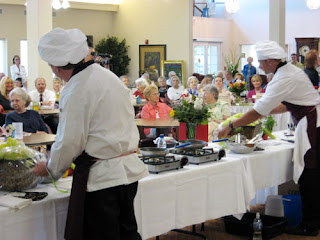 girls in bright orange cheerleader outfits appeared, one was Mary Jane's granddaughter, Caroline, and the other was Caroline's friend, Linley. Within a few minutes, we bonded and I spent the rest of the day with my newest little Kansas City friends. Another good lunch under my belt (which is expanding because of my Garden Village meals, so I'd best be careful - the food is gooooood), it was time to get on the bus and head to the contest, which was being held at a sister community (The Carlisle). 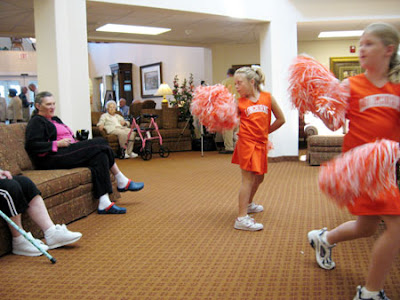 What a fun activity. Head chefs from six other Holiday Retirement, Corp. properties had previously qualified for the afternoon's competition and they were already assembled at a long wrap-around white linen covered table in the Carlisle's main dining area. The room was already packed with residents from other communities when the Garden Village contingent arrived, armed with its secret cheerleading weapons, Caroline and Linley. It was their job to lead the cheer for Garden Village's head chef, Bill - a/k/a "Bubba." What a great guy. You'll see a bunch of photos of Bubba in action since I must've 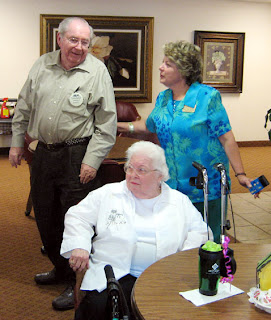 snapped over 50 shots of him slicing, dicing, sauteeing and plating. The rules of the day mirrored the real show's rules as each chef was given the same "secret ingredient" basket and they had 45 minutes to prepare dishes, all of which were required to be in line with Holiday's dietary requirements. Music, snacks and some darn good cheering from the "orange sisters" - and it wasn't long before the aroma's from the chef's pans filled the Carlisle's open space. I was getting pretty hungry as I moved around, snapping photos. 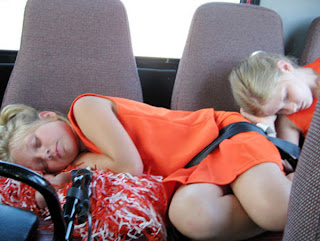 Well - unfortunately, Bubba didn't win. But everyone was such a great sport about it. The real winners as you might imagine were the residents. Honestly, the Garden Village residents have such an up and energetic feel about them. I love being around the place and plan to spend more time there as I get to know the folks. Obviously, I'm hoping Mary Jane is able to arrange for some special interviews for the project.

In the meantime, I'll show you just a few of the photos from today's competition. My personal favorite is the one above, taken during the bus-ride back to Garden Village. A hard day of cheering behind them, the orange sisters crashed on the back line of seats, pom-poms still in hand.
Posted by H.J. Getzov at 8:44 PM