Not In NYC Anymore

When the jet's wheels lifted off the LaGuardia runway, I wanted to feel something. After all, it was a pretty big moment. I was leaving New York City after 13 years and 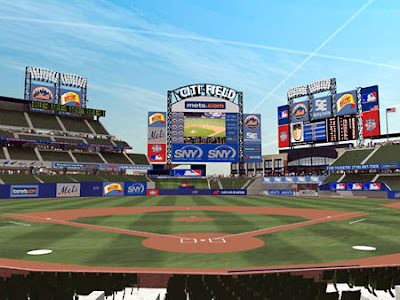 figured I should be feeling something.

As the plane started its right turn, I saw the new Shea Stadium... or should I say, Citi Field. The name didn't sound right as I moved up in my seat to get a better look. Steel beams, trucks, a few bulldozers, they say it's going to be ready by 2009. It's funny when I read something like that, it seems like it's so far away. Think about how much can happen in two years. And then, the next thing I know, I'm sitting in the new ballpark, reminiscing about staring at steel beams from a plane window.

I'm on my way to Wichita. After a year of planning the trip... After a year of selling my stuff on Craigslist, moving the remains into a DUMBO storage bin... After a two years of fighting a greedy new building owner and his family for the right to stay in a rent stabilized apartment... After 13 years - that's the second time I said that number but, to be honest, I haven't put pencil to paper to figure out the actual time I lived in the city - of living on W. 87th Street and four years of living in Carroll Gardens, Brooklyn before that... After more than a decade of living a dream and working in the music business as an attorney and personal manager, fairly successfully, I might add... After all this, I was finally on my way...to Wichita. Well, that's only because Wichita is where I got the best deal on a car rental (thank you, Enterprise -shameless plug - there will be more of these). Seriously, their quoted price was almost half of everywhere else I looked when I was doing the research. As it turns out, Kansas is right smack in the middle of my target area for the trip. I'm heading to America's heartland. And I'm very excited about it.

While reading a USA Today, waiting for my Wichita flight at my gate in Hartsfield (Atlanta) Airport, two men, both in cowboy hats sat next to and across from me. They looked like Marlboro men, tan, crinkled cheeks with the deep lines, manly men, wearing plaid shirts and worn jeans and old snakeskin boots. I offered part of my paper to one of them, he took it and grunted. A Midwest thank you? When I heard more grunting, I peeked to see what was going on next to me.

One man, the taller, older one with white hair, had his hands clasped around a light green, what looked like a Granny Smith apple. He winced and gnashed his teeth together as his fingers dug into the apple skin, forcing juice to run down the outside of his palms. It’s good to know the Festivus feats-of-strength thing had made it’s way out to this part of the country. When the apple finally exploded, a small chunk bounced off the gray airport carpet and landed in front of my left shoe.

“Lost that one,” the man laughed and winked at me as he handed a smaller piece to his cowboy friend. I smiled at him, nodded and went back to reading the sports section. That was a new one to me. Seriously, have any of you ever ripped apart an apple with your bare hands to share it with a friend?

Some of you already know this. The airline, Delta/Atlantic Southeast Airlines lost my baggage on the way from Atlanta to Wichita. So, the trip was off to a pretty strange start. I’d heard about this kind of thing happening. I know it happened to my brother once, but I wasn’t a member of that special club. Until today, that is.

It turns out, if the airline sees a particular plane is too heavy, they choose to arbitrarily remove baggage instead of removing passengers. But, of course, you don’t know any of this until you’re staring at an empty luggage carousel moving from left to right, the same three bags passing by, over and over again. Finally, a nice baggage handler, Alonzo, told me all the bags had been unloaded and it was probably a good idea to make a claim. Time: 1:38 PM. Enter - the Delta baggage tracking system, which I sorry to say, is not very sophisticated.

No matter who I called or asked, the airline simply had no idea where my bags were or when or if I was ever doing to see them again. The good news is that I finally got my bags. Time: 11:22 PM. So much for getting down to Dallas for morning interviews. Still, Alonzo came through in a big way (I’m writing a letter to Delta to commend him) when he arranged for a voucher to stay at a Sheraton for the night, dinner included. Delta also gave me a voucher for future travel. How can I complain?

Some more good news - we'll put this under the "turning lemons into lemonade" column. While sitting at the airport bar I had a chance to chat with some fellow travelers and workers, some of whom lived in or near Wichita. I was able to pass out a few cards and, who knows? When I return to Kansas in a few weeks, I may have some interview opportunities ready to go. It turns out Alonzo wants to introduce me to his grandmother who lives in Kansas.

Overall, it was a good first day in spite the baggage thing. My guess is I'll be needing to roll with the punches as this trip unfolds. Today was only a first little test.