It hasn’t taken long to settle in here. Once I found the public library and the Chick-fil-A’ (which is right around the corner) – I was all set. For those who don’t know

what Chick-fil-A' is, you’re missing what may be the best chicken sandwich in the world. I decided it's important to have one a week for this entire trip as a kind of reward.

The area where I’m staying in Dallas is called Las Colinas; it’s part of Irving and so far it’s been very convenient to where I've needed to go for interviews. Earlier today, I scoped out the local Bikram yoga studios and lucked out in finding a pretty special space where I'll be able to practice for the entire month. Bikram Downtown Yoga is in the Arts District of downtown Dallas and one would never know looking at the building, what a huge and beautiful studio is located inside. Of course, the people who run it, Atina and Julie, are great, which is why the place is what it is. I haven’t made it to the 6:00 AM classes yet, but I’m sure I’ll make it one of these mornings. It’s good to know I have a place to practice and, as soon as a class begins, I feel like I'm right back in NYC at Chelsea Bikram. As far as yoga in the coming months ... I've already checked ahead and, with the exception of Nebraska, I'll be able to find a yoga studio everywhere I'm headed. When I get to the corn husker state? I'll just need a room with a thermostat control so I can raise the heat to 100 degrees. I'm sure the hotel will just love that.

The Birds? The funniest thing happened after class tonight. As I was showering I couldn’t help but notice a strange, kind of beautiful sound coming from outside the door. It kind of sounded like one of those new-agey CD's. When I said my goodbye to Julie and walked out the door, it 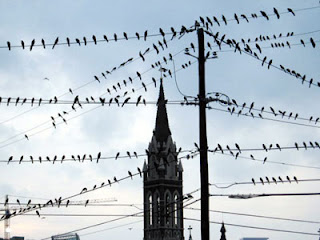 was a scene right out from “The Birds.”

“Crazy, huh?" a woman laughed, lifting her yoga bag over her shoulder as she shut her car door. "Grackles," she added. I looked up and watched with the woman as these medium-sized black birds covered the power lines and poles. "Those fellas have really become a problem for a lotta folks down here."

You should have heard the sound. I mean, I wish everybody out here 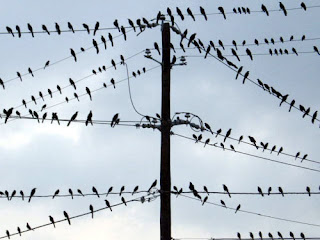 could've seen this. Here are some photos I managed to snap but they don't come close to giving you the same feel. At one point, the flash went off and the birds scattered. The woman with the yoga bag ran into the studio. I thought I was going to cause some kind of bird riot and then you would have seen the news report on the next day's Today Show. "Man swarmed by Grackles." And there'd be a photo of me doing my best Suzanne Pleshette* imitation. (*-for those who've seen the movie).