Getting Down To Business

And to think I was concerned a few weeks ago that I'd be down in Texas, sitting in a Starbucks (or Chick-fil-A), twiddling my thumbs, no interviews in site. Things started out today with a bang. All the seeds planted during my advance work in November and December, they all appear to have hit their mark.

The Wellington At Arapaho - I drove up to Richardson in the morning to conduct some interviews set up by Terry Abshire, the Activity Director at The Wellington On Arapaho. What a beautiful facility and every employee I met was a nice as 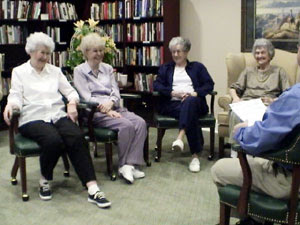 can be. After leading me into the day room - sort of a large sitting area/living room used for meetings - I was surprised to walk in and find four ladies, ready to go ... all at once. It was most likely my fault for not communicating to Terry that I do the interviews one-on-one. Unfortunately, there wasn't time to make the correction and, by the time I'd unpacked my equipment, four more people had arrived. Than another six. An audible at the line was in order. Before I knew it, I was walking around the room leading a kind of town meeting with about 20 of The Wellington residents. It was a lot of fun and I was able to video some of the folks by asking questions, while moving around the room. But it was unexpected. Still, the nice thing is, I was able to meet a few people who I decided to contact for follow-up visits, so this was a kind of appetizer for me.

The Waterford At Mesquite - This retirement community is another of the Capital Senior Living properties here in Dallas. (The Wellington is part of the same group). As soon as I walked into The Waterford, I was again struck by the beauty and overall setup of the place. It looked like a nice hotel, as did the Wellington. The dining room was directly to my right as I walked through the door and the attendants were setting up for dinner, laying out silverwear and napkins. Glen Miller music was playing in the background and, for a second, it felt like I was at The Concord, standing in their large dining room.

During the afternoon, I sat for awhile with Liz Hamlett, The Waterford's Activity Director, and we reviewed a long list of possible resident interviewees, which she prepared over the preceding week. I had already enjoyed several phone calls with Liz, so it was great to be finally sitting with her in Mesquite. As we sat in the small activity room, a dozen or so residents played their daily blackjack game. I stopped by a corner table where where one woman was working on the biggest jigsaw puzzle I’d ever seen.

“Everyday,” Liz smiled, telling me that the woman worked on some kind of puzzle every single day.

Liz and I completed our review and she was going to set up a couple of resident interviews for me for tomorrow. After that? We'd see how things would unfold. She also had some other ideas about some other folks, most notably a gentleman named Vernon and a former Ms. Senior Texas, Mary Frances Hansen. I told Liz I'd give them a call later in the evening to see if they'd be interested.
Finally, it was time to get down to business.
Posted by H.J. Getzov at 2:55 PM