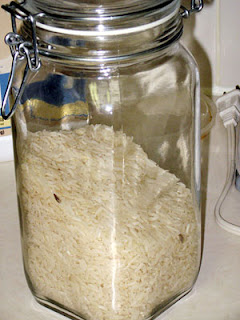 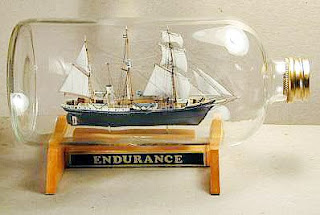 Basmati rice in a hermetically sealed jelly-jar - I'm talking air-tight here, complete with one of those rubber rings around the edges of the top. I love these kinds of jars and picked up three of them at an Essentials that was closing down on the Plaza a few months back, figuring this would be the perfect way to store various kinds of dry goods. Rice seemed to be a natural choice, especially since I've been trying different rice types as I do more cooking and experiment with different dishes. (How to cook the rice? That will be a different entry; I didn't realize how challenging that can be). Back to the issue at hand.

Get the point? Well, perhaps you don't quite yet. Here's what you'll need to do, take a better look at the picture on the right. Do you see two little dark specks? Now, allow your mind to do its thing.

"The Best Laid Plans ... " - So I came home the other night after a yoga class, having picked up some fixin's for my special - I don't know what you'd call it - but it has onions, yellow peppers, mushrooms, curry, garlic, pineapple chunks, red kidney beans, cashews and my absolute favorite, "Tuong Ot Toi Viet-Nam" chili-garlic sauce (do any of you know this sauce? Fantastic 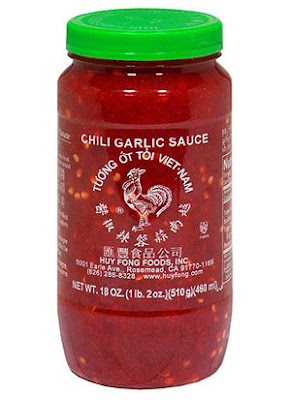 - here's a link to one online vendor. You've probably been served it when you go to a Vietnamese restaurant. I know Saigon Grille serves it. Mmmm, mmmm, good). So, anyway, I saute it all together and then serve it with, you guessed it, basmati rice (sometimes wild or brown to mix things up a bit). And then ... if I'm in a really good mood, I add some mango chutney to the deal, to give it that sweet and spicy touch. I call it ... well, actually, I don't have a name for it yet, but I'll take suggestions. Perhaps "Harry's Special Rice?"

That's where I was at the other night when I started unpacking the groceries. To say I was psyched for a good meal? That would be an understatement.

Now, this is when it gets interesting (and a little unsettling, for those of you who have exceptionally weak stomachs). I started sauteing the onions, peppers and mushrooms and went to grab the large jelly-jar with the rice, so I could get that on its way.

I dipped my head down a bit to get a better look, turning the jar so the light reflected off to the side, allowing me see things more clearly.

I'm not going to go into the details here - you have the photo up there, so you see what was 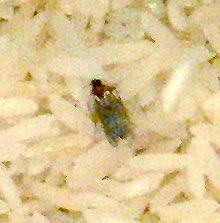 happening. All I can say is I'm just glad this was "white" rice; thank God for the contrast. The dark speck was, you guessed it - a living creature and ... if one little friend wasn't enough, after I twisted and turned the bottle a few more times, I noticed the guy had some company.

Needless to say, Harry's Special Rice was going to be served sans rice that night; I didn't want the dish to be too special. The fact is, the whole situation grossed me out. I mean, to see moths in the rice like that. Still, as disgusting as it was, I was also, as I said, pretty fascinated by the situation. I couldn't help but wonder, "How the hell did those critters get into that damn bottle!?" I hadn't opened that thing one time since I bought the rice at Whole Foods and poured it out of the plastic bag and into the jar. And when that metal clamp locks down over the rubber ring thingy - there is simply no way anything gets into that jar, right? I mean, am I right or am I right?

It's Wikipedia Time! - Well, I started out with Googling the words, moth, rice, basmati, gross. And, sure enough, I started to read posts about how rice can often contain the larvae of certain kinds of bugs, including moths. This certainly explained how something like the great moth caper could have happened. The fact is I usually wash the rice - someone told me it's a good way to rid the rice of the extra starch, allowing it to cook better, and all that. And that does seem to work, I have to say. But now I see that washing rice has some extra benefits.

A Sad Farewell - First of all, before anyone out there goes all "Michael Vick" on me, I love animals and would never intentionally do anything cruel to them. Having said that, after moving the bottle around for about an hour or so, I ... well ... let's just say the moths are no more

of this world. My morbid curiosity pushed me to search for more bugs or perhaps even see some eggs. So, of course, this then prompted me to twist and turn the jar, up, down, right and left - over and over again. I'm guessing the thousands of kernels of rice must have suffocated those guys at some point during this process. At one point, I actually thought about that scene in "Witness," where John Book (Harrison Ford) releases that huge load of grain into that silo, suffocating that cop. I guess you could have called me a kind of John Book that night. That works, except that cop was evil and these two moths were most likely good, solid citizens. Or were they? They cost me my dream meal that night. Bummer.

Into The Fridge - Until I get to the bottom of what's going on in those jars, I'm not taking any chances. Everything open, food-wise, is heading into the cold. The good news is I haven't seen any other moth friends hanging around, but I'm still concerned. Then again, what's a person to do? I mean, if the larvae are already in there when I buy the stuff, who's to say ... Yecchhh. I can't go there. All I know is, I'll be scrubbing my rice every night from now on. Either that or the name will simply be "Harry's Special," and we'll go with the stand-alone dish.
Posted by H.J. Getzov at 9:12 AM