A young woman wearing a navy blue sweatshirt with large yellow words on the front - "MARTHA'S VINEYARD." I spotted her waiting for coffee while on line at the Plaza Starbuck's. Add to that, my iTunes was playing Sarah Mclachlan's “Angel" at that very moment. These two things - actually, something else was in the mix. The fire roaring in the fireplace about four feet from my table, that was the third piece to the puzzle. The name on the sweatshirt, the music, the 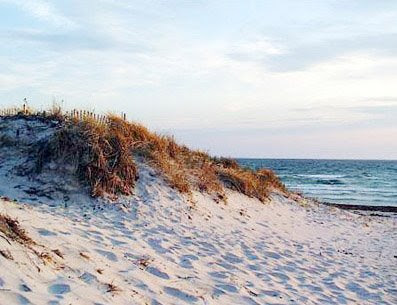 fire - it was like a perfect storm. I stopped my work, leaned back a bit and let my mind wander.

I miss the water. More specifically, I miss the ocean.

The vastness of it, yeah, that always gets to me; another reminder of the abundance of it all. And I’m not simply talking about water. I’m talking about abundance, in general. Then, of course, there's the smell – it’s that first whiff that hits the nostrils, sometimes from many miles away - that's the thing that really lets me know I’ve arrived. I don't know if it's the seaweed? I think that may be what I'm talking about here. It's a kind of fishy smell, unmistakable. And the salt air - there's nothing like that. (btw - that's a Vineyard photo above)

I’m heading to Florida this weekend and will make sure I make a stop at the beach; I need a follow-up to an experience I had a few weeks ago while in Fort Lauderdale.

My brother and I took an early morning yoga class and were relaxing at our table, people-watching from our "Floridian" (great, cheap diner on Las Olas) seats.

“Where’s the ocean?” I asked as we were finishing up. I had a plan.

My brother pointed over my right shoulder. 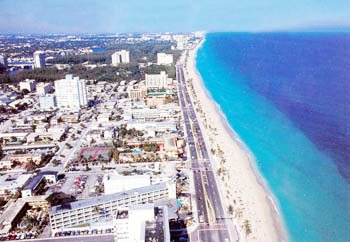 And that was that.

When we got close, I rolled the window down and, there it was. The whiff. And as we made the turn onto, I guess it's "A-1-A" – the strip that used to be notorious for its “spring break” chaos, but since way toned way down by the local authorities. As we made that turn, I asked Stuart to slow down and pull the car over to the right for a second.

The next thing I knew I was out the door and hopping over a small wall, pouncing onto the beach. The sand was pretty hot, which felt great on my toes, exposed through the open sandals. I made a beeline for the water. Knowing my brother was parked in a “no parking” zone, I knew this was going to have to be very much the compressed beach experience.

Lots of folks were out enjoying the hot sun, listening to radios, playing Frisbee, all that beach stuff. This was something I hadn't seen in, God knows how long. Perhaps since I got married at 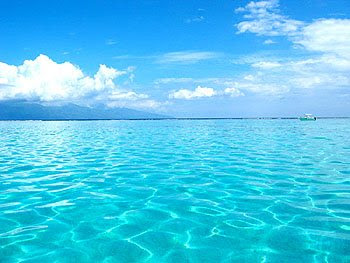 Montauk Point. And that would be ... 1998? A decade already? Now that is just plain old wrong. To think I've stayed away from something I love like that for so long. That is something that needs to be rectified. This jaunt was a start at doing just that.

I ran directly into the water, sloshed around for a bit and then stood there, looking out over the Atlantic. It was misty out. Sunny, but misty. I took in a few deep breaths, listening to the seagulls doing their thing. Then I bent down and, using both hands, scooped up what amounted to a small cup of water into my hands and lifted it up where I let the salty liquid run over my face and down my neck, wetting my shirt. “One more for the road,” I thought as I bent down again and scooped up another load.

I turned, ran back across the sand and then, up and over the wall and back into the car.

That was that. I think the whole thing took maybe about 83 seconds, tops.

“How was it?” my brother asked.

I smiled, wiping away some water from my chin, lifting my fingers to my nose to check out that unmistakable smell. Next I raised one finger up to my mouth, giving it a bit of a taste.

Hey Harry,
Sat next to you on the plane enroute to Tampa/Ft Lauderdale. Hope you made it to your destination quickly and enjoyed your family time. I totally agree with you about the ocean. Can't get enough of it. I'm already back home land-locked in western MO and it is sad to me. Maybe someday I'll find myself living at dleast a days drive from the beach. Me and my friend Emily were traveling together and when I told her I had to see the water, she was like you've seen the water. No, let me rephrase that, "I need to stand on the beach, feel the sand in my toes, smell the salt in the air, feel the ocean mist and gaze upon it" She didn't get it, some don't, that's fine, but it doesn't change my desire. I fell in love with Pelican's this trip, haven't seen so many up close on any other Florida trip. They have such character.

Anyway, your not alone in your love affair with the ocean. (smiles)