Doing this kind of work has served to open up all kinds of doorways to the Harry Getzov mind. I can be sitting with someone during an interview and that person will say something, or perhaps I'll smell something cooking in their kitchen - just about anything like that can serve as a trigger. Suddenly - a mind-shift. And, for a split second, I'll have traveled some place else.

A few weeks ago, I was talking with a gentleman after an Eldercation interview and he mentioned something to me about heading out to the barber. He loved getting his hair cut and started to tell me some stories about going to the barber as a young boy. And when he said

this to me - just like that (snap!) - a face popped up. It was as though someone clicked a web page link and a photograph loaded in front of my eyes.

That faces was Gus's.

I don't think I've thought about Gus for 35 years.

Special Moments - I loved Saturdays when I was little. Something felt different about that day. Actually, the different feeling started the night before - the excitement would already be building as I'd shut my eyes so by the time those eyes would open next, by then, my lord.... I can feel that happy feeling even as I write this. It felt great.

Saturday's meant one ... well ... actually, two things to me back then. First of all, there wasn't school on Saturdays so that certainly worked. But it also meant I would have the chance to head into downtown Springfield (MA) with my father. And that weekly routine pretty much consisted of two main events: lunch at the Californian, followed by a walk to Gus's barbershop where my Dad would get a haircut. I know that might not sound all that exciting now but, man, it was to me back then. Those Saturdays and those two activities, in particular, were such a huge part of my life. In the earlier years of the routine, I'm talking around 1962, 63 or so, I think Gus's shop was somewhere in the old railroad station (now, just a dark, dilapidated shell of a building). I can sort of picture the scene now and the first thing coming to mind is that it was really dark, not at all lively. Even then the railroad station seemed spooky to me. But I remember going in there and my Dad getting his haircut; that minimized the spookiness factor.

Gus. I can see him so clearly in my mind. Tall, silver rimmed glasses, clefted chin, very handsome and proper. I recall him being German, but it's possible he was from Austria or even Switzerland. I'll have to ask my dad if he remembers where Gus was from. I remember how Gus always wore a spotless white smock or apron - a kind of barber's uniform. And then there was his hair, every bit as white as the the color of the apron and always, I mean always perfectly coiffed and combed backward, slicked down, no doubt, by any one of the many hair tonics lining the counter in front of the barber chairs. It looked as though if you touched Gus's hair, the outside coating would crack as you pushed your finger in. It reminded me of freezing rain on top of fresh snow.

Come to think of it, I bet he used Brylcreem since I remember the way Gus used to rub his hands together, ready to apply the small spot of white cream to my Dad's hair. 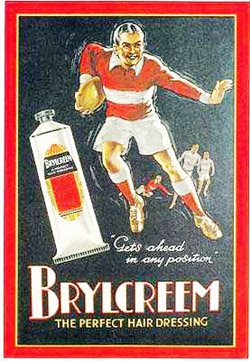 little dab'll do ya." Anyone remember that?

(Note: Did you know - Fred Flintstone's famous "Yabba Dabba Doo" is derived from the Brylcreem jingle? FYI, the actual lyrics are: "Brylcreem, a little dab'll do ya, Use more, only if you dare, But watch out, The gals will all pursue ya,-- They'll love to put their fingers thru your hair." Take a look at this recent print web ad. Can't imagine something like this back in 1964 but, then again, check out the slogan under the rugby player? Hmmm.)

"Good Morning, Mr. Getzov" - The greeting was always sort of abrupt, staccato-like, but not in a short, cold way. Gus was as warm as could be. As a matter of fact, it's people just like Gus who I realize now had a huge effect on me when I was little and, in some ways, it's my experiences with folks like Gus in those earlier years that have led me to do the work I'm now doing. (Note: I only wish I had a good photo of both Gus and his shop. I saw something online the other day and it reminded me a lot of his downtown place. See the photo below, to the left).

It was obvious that Gus enjoyed those Saturday mornings as much as I did, greeting his customer's little sons and daughters and loving those visits almost as much as he 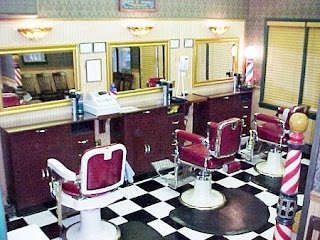 enjoyed working his craft. Come to think of it, those mornings were pretty much about fathers and sons - this was a man thing, I'm pretty sure.

So, after downing the best roast turkey sandwich in the city, (with the best Russian dressing I think I've ever tasted to date, by the way), my Dad and I would walk over to the train station. And as soon as we'd round the corner, approaching Gus's, I'd smell the shaving cream, freshly cut hair, Vitalis, Brylcreem - that fresh, soapy clean barbershop smell. And if there had been any doubt what day of the week it was, that doubt was most assuredly wiped away at that very moment. Sometimes, if the timing was right. I'd hear the massager from all the way down the long dark station hallway. Ahhh, yes - the massager. I loved that gizmo. Have you ever seen one of those? Do you even know what I'm talking about? (Check out the picture below on the right - that's it! I know, I know, it looks like something you'd find under the hood of a car. But that's almost exactly like the one Gus used). The barber would wrap a strap around his hand, with the metal, "command module" part resting on top. When the switch was clicked on ... "Good Vibrations" is about the best way I can put it. The barber would then run his vibrating hand over and all around the customers head, giving him the most relaxing head massage. Gus usually ended this service with his special finishing touch, allowing the weight of the massager (it was actually pretty heavy from what I can remember), drop his hand onto the 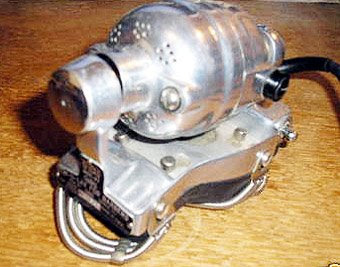 customer's shoulders and upper back, where he'd let it do its thing for another 30 seconds or so; a barber's 1960's version of a "happy ending," I suppose.

For the most part, when it came to the whole head massage thing, I was a mere observer but, sensing my curiosity, I remember the first time Gus signaled for me to hop into the chair, where he then gave me a sampling. I think my teeth chattered for ten minutes after that go-round but it was fun; I'm sure I was giggling uncontrollably at the time. It was just a giggling kind of experience. How could a person not giggle getting shaken around like that?

A few more memories: There was a pretty blond women in the shop every week, too; the manicurist. Very sweet. You know what? I'm now 50 and, as unbelievable as this might sound, I don't think I've ever had a manicure in my entire life. Something to put on my list,. I suppose.

Okay then. Vitalis, manicurist, crazy metal vibrating massager, warm shaving cream ... But now, to the star of the show. To what came to be the centerpiece of those visits. At least for me, it was the centerpiece.

Learning About The Rack - Okay. So by now, you've probably already glanced below and saw the photo I included, so the mystery is now gone. But here's how this part of the story goes: 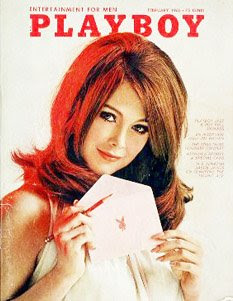 Suddenly, even though the turkey sandwiches and special moments with my father remained important to me, the rack started to take on a whole new significance for me - in more ways than one.

Strategy Is Key - It's funny, but I think even at 12 or so, I was wise enough to not merely bolt over to the waiting area and immediately grab 3 or 4 Playboys for my reading pleasure. I have to say, I remained cool, calm and collected, first accepting Gus's warm greeting and then slowly, purposefully gliding into one of the red leather, silver studded waiting chairs lining the back of the shop, behind the barber stations. Then, after scoping things out a bit, waiting for my moment when Gus would be perhaps applying some shaving cream or brushing loose hair away from my Dad's eyes - then, I'd make my move. And there was a definite skill involved here - sort of a pre-Star Trek, "cloaking" device technique, I like to call it. It worked like this: I figured out a way to take, I don't know, a "Sporting News" or "Life Magazine" - it had to be something large, "National Geographic wouldn't do the trick - and I'd then carefully slip a Playboy under the larger magazine, so the "disguise" magazine would then become a kind of book-cover. And that was that. I'd then return to my chair,sit back and then read to my heart's content. Well - I wouldn't exactly call that reading. It was probably more like staring, ogling. Perhaps a bit of drooling? Seriously, I was still careful enough to keep one eye peeled on my father and Gus throughout this entire process, peering over the top of the magazine into the mirror, just to make sure they didn't know I was up to. One eye fixed on them, the other peeled on ... well ... All I can say is "Thanks, Hef."

"Did You Know?" - I'm blessed, I understand this. Even with my folks' health issues sometimes rearing their ugly heads, I am quite the lucky man to still have my parents around; I really am. And I'm saying this during a time when I've been hearing about the deaths of several of my closest friends parents. But not to dwell on that here; that's actually a subject for another essay I'm writing now. The point here is simply this: my Dad is still very much alive and, after writing this entry, I thought it might be fun to find something out; to ask the obvious question listed above. My best guess? Come on - there is no way my father didn't know what I was up to back then. What do you think?
Posted by H.J. Getzov at 1:16 PM