'It's A Family Affair"

It's not a show I would normally choose to attend. Seriously, I'm not a huge country fan and I'm even less a fan of "American Idol." Having said that, I like Reba McIntyre from what I've seen of her and today's country music isn't the country music of Conway Twitty and George Jones. Also, 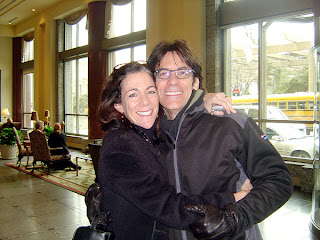 even though I don't like "American Idol," I did see parts of that first season and one would have to be an idiot to not notice what incredible voice Kelly Clarkson has.

So - I went to see the Reba and Kelly perform this past Saturday night at KC's Sprint Center. And it was great. 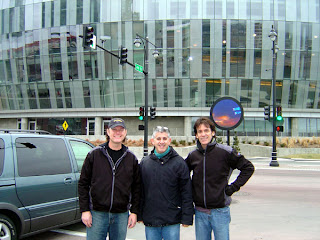 of some old friends out here. So, the caper was set into motion with Susan making her travel plans and my brother, (who is a good friend of Jim's and has performed and written music with him), helping to set up the rouse. We were ready to roll. Jim thought Stuart was going to be visiting me in KC and that we'd be heading over to the show. He set aside some tickets 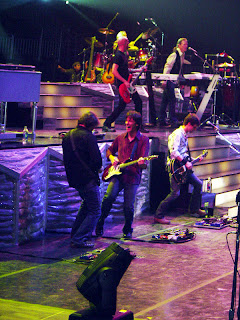 for Saturday night and that was that.

Well, it was a great plan until I caught some kind of death respiratory virus a few days before the show. Still, I'm not going to go into any of that here. The fact is I'm now writing about this after the event and I'm happy to say (1) I made it to the show; (2) the surprise worked; (3) I had a terrific visit with Susie after not seeing her too many years; and (4) the two of us had a great lunch with Jim before the show. And I did all of that while sucking on crushed ice for the better part of two straight days. Who knows? Perhaps it was stupid for me to be out and about feeling the way I was feeling but the truth is, I had told Susie this was going to happen and I wanted to keep 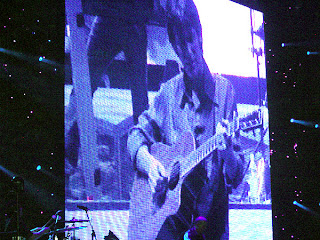 my word, no matter what.

The Smile - "Look what a great time he's having up there." Susie must have said that five times during the show as she snapped of photo after photo. And each time I glanced over and watched her, watching her older brother up on the Sprint Center's stage in front of 14,000 fans, playing guitar with Reba and Kelly - I couldn't help but be inspired by the whole scene. Susie must have taken 40 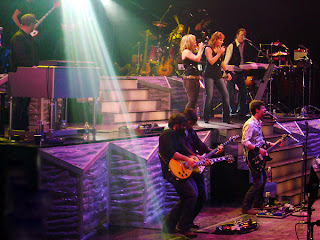 pictures or so; every time Jim's face popped up on the huge video screen, she was right on it. And as I've already written to Jim since the show - I don't have that many people in my life who are really enjoying what they do for a living. It's just so rare. So to see him that way ... that night? It just felt plain old good, chest cold or no. And I don't know if it was a coincidence, (maybe it was the ice cold Cokes and soft pretzels) but I could have sworn that on the way home that night, I felt better physically. And to think I was just going to drop Susie off and return after the show to pick her up. I'm just glad I chose to take the shot. What a frickin' treat. Once again, I figure it goes somewhat like this: when life presents chances to have these kinds of special moments, it's pretty much up to us to notice these opportunities for what they are. And then it's up to us to make a choice as to whether we grab hold of them - or not.