I think it was in the second quarter - that's when I heard it. The sound I know so well.

And then come the arms - bent at the elbow - doing that up-and-down thing.

OK, Kansas City - I'm going to say something. And please understand this. It is most definitely not about you.

That chop thing. Oh my lord.

As a huge fan of the New York Mets, I've been exposed to that darn chop under very different circumstances. It's what the Braves' fans do in Atlanta. And I hate it. I know, hate's a strong word. But when my Mets are getting their brains beat out by those Braves, (usually by Chipper Jones himself), and those Atlanta fans start with that annoying little arm dance and

So you can imagine how I felt when the chopping started the other night. Of course, I laughed. And since I wasn't emotionally involved in the game, the Kansas City version was pretty much benign to me.

The fact is - I LOVED my first Kansas City Chiefs game! Tomahawk chop and all.

That’s what Vito asked me the other day as he was chatting with someone around the corner from my cubicle at work. I don’t think I’ve ever met a nicer more down-to-earth group of people in a workplace and Vito is one of the special ones, I can tell.

And the next thing I knew, I was holding two tickets for the Chiefs' pre-season game against the Dolphins for last Thursday night, compliments of a gentleman named Vito. 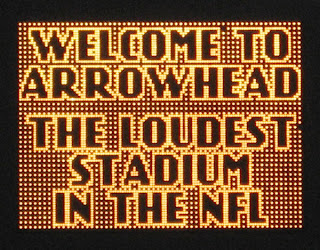 Talk about a crash course in Kansas City sports. Right on the heels of last week's Kauffman Stadium debut with the CT-Crew, it was time to travel to the other side of the parking lot and take in a taste of Arrowhead Stadium.

"Are You Ready For Some Football?" - I’ve seen Foxboro. I’ve seen Veteran’s Stadium (back in the day). And, of course, I’ve seen The Meadowlands more than a few times thanks to my good friend, Stuart. But, let me tell you something. They really know how to do football in Kansas City. And this was just a pre-season game!

The place was packed. Well, just about packed. I’d say about 98% packed from the look of it, with just the slightest smattering of open seats here and there on the most upper levels of the place. The man in sitting behind me told me Arrowhead holds something like 79,000 people. And it looked that big.

After parking the car, my friend Lynn and I walked through the lot toward the stadium. This, of course, gave me the chance to 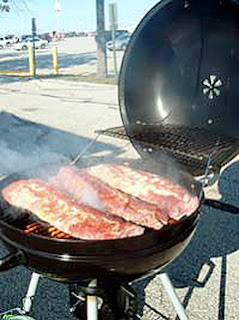 take in a bit of Kansas City 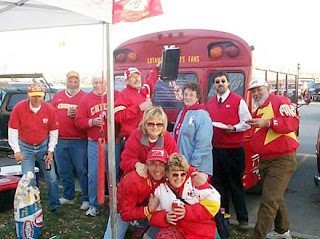 tailgating. Okay, so I’m not the biggest football fan. Still, I love the sport because I love just about any sport and the fact is I do follow the NFL for the entire season. (i.e., I’m not just a playoff kind of guy). But, baseball will always be number one in my book and, given the choice, I’d rather sit in a half-full Kauffman Stadium watching a young Royals’ team grow over the next few years, than watch an NFL game. Nothing against football. It’s just that we all have our favorites and baseball’s the one for me. I can’t see that changing in this lifetime.

Having said that, I had an absolute blast the other night. The colors. The pageantry. I own only one red/orange piece of clothing but I'm glad I remembered to put it on as I walked out the door. And then there were those cheerleaders. What are they called, “Chief-tettes?” The food? Let’s just say 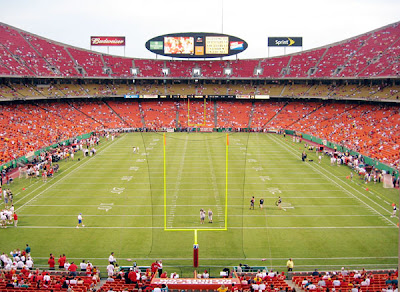 these folks do it right. I'm guessing there was a Gate’s Barbecue every time I turned an Arrowhead corner and good barbecue is always a warm sight for these eyes. And that was just the start of it. So many different menu choices and every one of them looked good to me. The caterers at Shea should take a trip out here to see how the Kansas City folks do it. And they should take notes. I’m just hoping the new Citi Field will make NYC proud and offer more than pretzels, cotton candy, hot dogs and knishes. It’s time to kick it up a notch. They’ve 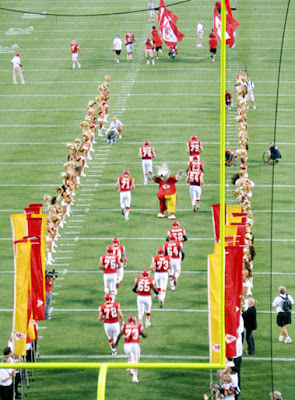 certainly done that here. Come to think of it, they've pretty much done it everywhere else but Shea Stadium.

The game? What can I say? The seats were fantastic, just like Vito said they'd be. A couple of folks from work sat right next to Lynn and me and that was fun, too. They were a big help in teaching me the script as the night unfolded. Certain cheers chanted at certain times – it was a blast watching people getting into it.

My hunch is I won't be getting anywhere near Arrowhead Stadium once the regular season starts. Judging from the look and feel of the crowd the other night – I don’t think there's going to be one seat open from now through December. But that’s okay with me. From what I've been hearing, the entire city comes alive when the season starts and one doesn't have to be physically present at the stadium to get caught up in the excitement.

And then, it'll be time for the next round.
A good solid case of Royals' fever.