That's What I'm Talkin' About!

For years - I'm talking 18 of them - I've been telling my folks about Saigon Grille. When I lived in the city, there were times I must have ordered from that place about four times a week. And, whenever I called, it felt as though my "Curry Ga, rice and salad w/ two Cokes" (standard order) was at my door almost before the phone clicked off. I love Vietnamese Food. Malaysian food, Thai food - anything ... what do they call it? Pan Asian? "Best deal in town, dollar for dollar," is what my friend Howard used to say. I couldn't have phrased it better.

My folks have taught me a lot of things over the years, but when it come to adventurous cuisine, they've been pretty much 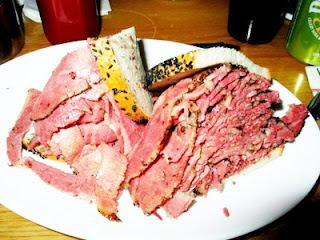 straight down the middle. Listen, they're NY'ers, born and bred in Brooklyn, so it's not like we had pot roast and green peas for dinner every night. Our upbringing was filled with good, what I'd call ethnic food. From the trips to Union Turnpike Deli - to Ratners - to Chinese food - to Italian food at God knows how many places - (I'm not going to list every restaurant I've ever eaten at here, or every meal, although ... I swear I think I could do it, as bizarre as that sounds). Still, when it comes to the more adventurous cuisines, the spicier, more unusual arenas - Indian food, Vietnamese, Thai - those categories have pretty much been my deal - discovered on my own as I made my way out to the world, independent of my folks tastes.

"Have you ever had Vietnamese food?" my dad asked the other night.

At that point, I reminded my dad about my one-man-show of support for the Saigon Grille on the corner of 94th and Amsterdam.

"We went to a new place. Terrific food." he said, as I listened to my dad excitedly describe what they ate. I loved listening to him talking about this new discovery, with my Mom chiming in, in the background, talking over the loud TV.

It's not like my folks are narrow-minded. My God, they were the ones always looking to instill in me the instinct to branch out, try new things. And that included foods. The reason for their more conservative approach to food choices may have stemmed from the fact that my Mom has had stomach problems, pretty much since she was a teenager, so that's just the way things unfolded for them, and then, for us. And even with her stomach issues, My Mom's often made some bold choices, only to then sometimes pay dearly for those choices. I love that about her, actually.

So, all those years of me mentioning my love for Curry Ga, or Chicken Tikka Masala, really, anything curry - and my Mom would immediately shun the very idea of eating "foods like those." And I always understood that reaction since they would probably kill her if she ate them. And, of course, my Dad, out of respect and love for his wife of now, 58 years, pretty much steered clear of those foods, too. After all, there were plenty of other choices on the menu.

Gunfight at "The Hu Ke Lau Corral" - Interviewing all the seniors I meet, I especially love when they talk to me about discovering new things at a later age. New cities, sights, hobbies, talents, TV shows, a type of music, and so on. To hear about people "stretching," expanding their boundaries at a later age - it's inspiring. That's the way I plan to be.

My Mom has been going to a yoga class over the past few months, largely due to the fact that 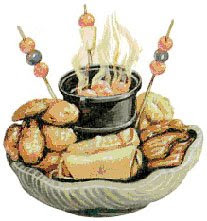 both Stuart and I are Bikram veterans and she has been watching us thrive in that environment for many years. And now, hearing my Dad excited that way, about Vietnamese food? I love it.

Talking about this reminds me about an incident; a funny (not so funny at the time) incident. It was back, I 'd say it was around 1968 or so; I was about 10 or 11. It was at the Hu Ke Lau Chinese ... well ... I think it was actually labeled Polynesian food. It was good, really good. Was it at the level of a Bill Hongs or any of the NY Style Chinese places? No. But, what else could you expect in Chicopee Falls, Massachusetts? I mean, I don't think there was anything even approaching good in Springfield, so, all I can say is thank God for the Hu Ke Lau. I remember meeting our best friends, the Posnicks, there on Sundays, I loved those nights out. Sundays, as most Jewish people know, seemed to always be the evening of the week chosen for the "Great Treif Escape" -a chance for the Reform to Conservative to Non-observant Jews to indulge in their lust for spare ribs and pork strips, not to mention the best Lobster Cantonese I've ever tasted. I've thought about the Hu Ke Lau over the years. I haven't been back there, but hear it's still very much 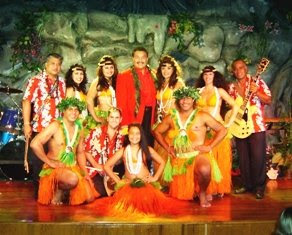 around and, actually, quite the rage. Something about an amazing twin lobster special and the best comedy club in the Northeast?? Can you believe that?!

But, here's where the aforementioned incident kicks in. You see, I didn't always love Chinese/Polynesian food the way I'm describing it here. Apparently - and I vaguely remember this - I was a Chinese Food resister back in those days. You've heard about Viet Nam War resisters? Well, I was looking to steer clear of Moo Goo Gai Pan. And so, whenever we'd head out to "The Falls" for those special Chinese/Polynesian dinners, apparently, I would tense up, clench my fists, and sit tight-lipped when it came to order-taking time.

"What's Harry J. gonna eat?" That was the burning question.

Of course, my folks were tolerant of their first born son for the first few episodes, I remember that. And then - now, you're not going to believe this - I'd order a steak and French fries. At The Hu Ke Lau, "Chinese & Polynesian" Restaurant. Honest to God, the fact that they even had that on the menu 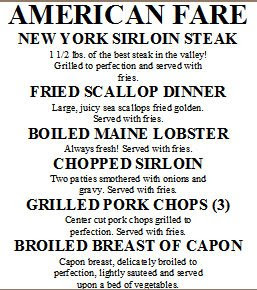 strikes me as odd when I think about it now. (Note: I just checked the current menu and, sure enough, under "American Fare" they still have the NY Sirloin on the menu, now tauted as "the best steak in the valley!! Grilled to perfection..." So, at least I had the chops to choose only the best, even when I was so far afield). And the truth is, it was pretty good, I remember that - again, part of my "remembering-every-meal-I've-ever-eaten" syndrome. I think my biggest issue at the time was that they only used Hunts Ketchup at the restaurant. At 10 years old, that had the potential of being a personal breaking point. But I made the adjustment. My parents breaking point? They were flexible, I remember that. I don't remember how many times they let me get away with the steak and French fries gig, but I do recall the lectures, short and sweet. The "you've got to try new things," "stretch your palate" lessons. At first, they'd throw those lines at me and I'd simply continue to chown down on my meat and potatoes meal. That was until - the showdown. I like to call it the "Gunfight at the Hu Ke Lau Corral" - complete with the blue waterfalls and wishing-well fountains. It was pretty in there, kind of like a ride at Disney World, complete with palm trees, fountains, Hawaiian-style music, exotic women (wait-staff). It was like Bali Hai in there.

Anyway, the proverbial shit hit the fan one Sunday night; my folks finally made their stand. That night, when I went to order my 1 1/2 pounds of the "best steak in the valley," I noticed the shadow of my Dad's hand closing in from the right. And just like that, the option fell off the table, so to speak.

Now, I don't recall the exact moment, but I'm pretty sure some screaming was involved. Right in the midst of that placid South Pacific motif. I pretty much freaked out at the prospect of not getting my steak and French fries as planned, sans Heinz. But, to their credit, my folks held the line; I can only guess that they had discussed this well ahead of time. Some kind of pact where they said, "Okay. We'll give this little character 6 steaks and then ... that's it. He's got to make the shift." We'll, I'd certainly reached my limit and now, it was time to ... freak out.

"Broadened Horizons" - Okay, so the happy ending is that I ended up loving Chinese and Polynesian food. The fact is I suppose I can credit that one unfortunate scene as a graduation, of sorts. I mean, if my folks hadn't done what they did, I'd never even thought about approaching places like Saigon Grille. The fact is, I might have ended up being a very boring person. Thank God that didn't happen.

So, back to the other night, hearing my Dad talk about their new taste sensations. That interchange caused me to smile all the way out here in Kansas City. That whole "circle of life" theme popped up in my head again. To remember how my Mom and Dad had been the ones to teach me to expand my taste bud horizons in those early years. With the training wheels off, I took their lead and later went off to college, then Europe, then the South, and then traveling cross country for Eldercation - all the time trying all kinds of tremendous new foods along the way. I was the one branching out and my folks pretty much stayed close to home, food-wise.; again, often for practical health concerns. And yet, the other night, it was so good to hear my Dad, at 84, sounding kind of excited about, of all things, Vietnamese food.

"And, what about Thai!?" he added at one point.

That's what I 'm talking about!!

Stretching culinary wings, even in their 70's and 80's.

The circle of life - They teach me; I teach them; We learn together.