Those Were The Days

Every time I pass by this sign, I can't help but laugh.

When I first moved in to my KC apartment, needing to find some places to get some basic living essentials, I started scoping out the neighborhood. As it turns out, 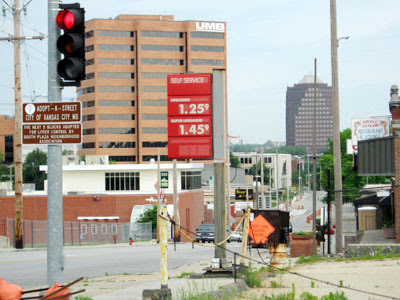 there is an intersection just up the street from my place - about a five minute walk, if that much. Cleaners, post office, breakfast/brunch restaurant, pizza joint, and not one, but two Italian restaurants, both of which are supposed to be pretty good. Who could ask for anything more?

I remember the first time I made my way up the street, my peripheral vision caught a glimpse of the sign you see here - it's on the corner of Main and 53rd. At first, the numbers kind of freaked out my system; they didn't make any sense. "The numeral order must be wrong," I thought. They guy posting the digits must have been in an altered state. Within seconds, of course, I saw the messed up building in back of the sign and and put things together. The whole South Plaza area is undergoing a face-lift so I'm sure this corner won't stay the way it is for that much longer. Still, I love that the landowners are allowing the sign to remain, "as is," - a snapshot from days gone by.

The sight of this sign caused me to think: When was the last time gas (unleaded) was $1.25 a gallon? That seemed like something easy to Google. Then again, what isn't easy to Google? Here's what I found.

Unfortunately, the days of $1.25 didn't occur all that long ago. The first time we saw those prices (I'm talking New England here - my home) - it was April, 1996. (See this EIA - Department of Energy site) It's interesting, because soon after that level was reached, there was a reprieve of sorts; the prices dropped to 94¢ in March, 1999 (I love writing the "¢" sign, when talking about gasoline. It's thrilling) But, that was it. From 1999 on, the "gasoline ¢" sign-combo was to be left in the dust. It's been up-up-and-away ever since then. 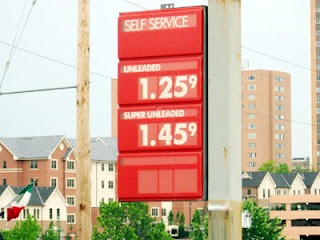 Just a thought: I just noticed looking at this data that, historically, when the prices burst through a dollar level (e.g., $2.00) in May, 2004, the same pattern emerged. It crept past $2.00, then fell back and forth a bit into the 1.80-1.90 levels, doing a kind of little dance. Then, it finally slipped back into the $2.00 region, never to return to the $1.XX levels again. It kind of makes you wonder. It's as though the industry was dipping their toes into the water, just to see how the new concept would take? Just how much we would take. And, once free and clear into the new dollar region, the mental barrier then broken, it was on to the next frontier, the next level. It will be interesting to see what happens as we burst through the $4.00 level. Just a thought

Anyway, I hope they keep this sign up at Main and 53rd; at least until the new restaurant or Walgreen's comes into the neighborhood. It's fun to reminisce. But it makes me wonder - as we keep looking at the real signs, the ones in front of the open gas stations - how much more are we going to take? How many dollar level bustings are we going to go through until this country does something about its predicament?
Posted by H.J. Getzov at 8:49 AM