So, when I first heard the sound, I reached to turn down the volume dial on my laptop. 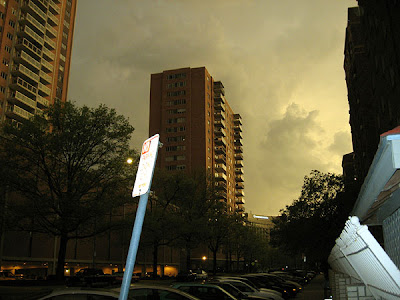 Someone at work mentioned earlier in the day that there was some "weather" headed our way. A euphamism for severe storms, or worse, tornadic acitivity; I love that last term.

Anyway, I lifted the window a bit and put my ear closer to the opening. Sirens blared in the distance. First loud, then softer ... then much louder, over and over again. I figured this was the tornado warning sirens doing their thing, on some type of revolving mechanism, shouting its warning from county to county; a kind of mechanized Paul Revere. I'd seen a few of these contraptions on the side of the road on my drives to work, but never heard them in action. It was eerie - as though an air raid was imminent ... or worse. I remembered hearing these sirens when we'd do the "duck and cover" nuclear explosion exercises in the 60's. They had those at Tiffany Street School all the time. Yes, yes - I remember those. (See "Bert, The Turtle" to the right)

"When you see the flash ... duck and cover." Plll-lease?! Can you imagine? I mean, what the hell was the point with that? And the funniest (saddest) thing is, our government was serious about that stuff. 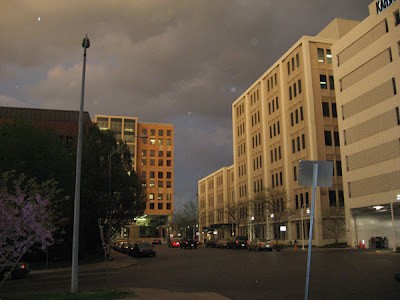 So, the sirens reminded me of that, to be sure. But it wasn't just the sounds that weirded me out. It was also the lack of sound. A stillness - it was unmistakable.

Something was happening. And it wasn't clear what it was. What to do?

Making My Move - Well, I suppose I did precisely what they tell you not to do at a moment like that. I grabbed my camera, put on my sandals, and headed out the door and down the stairs. I wanted to see this. I needed to see this. I'm guessing there's a bit of stormchaser in me. I 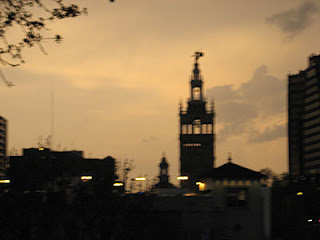 think there's a piece of that in all of us.

Happily, there's not much to report here. I'm glad I didn't end up in a tree five miles up the road and all that. I snapped off a few pics which you can see here, but they don't do justice to the actual view that afternoon. It's the coloring I wished I could have captured a bit better. A great camera might have been able to give you a better shot - I wish you could see that pre-storm coloring. It looked just the way I've heard it described. A kind of greenish, yellow color. The lighter photos show what it looked like at around 6:00 PM or so - which, in 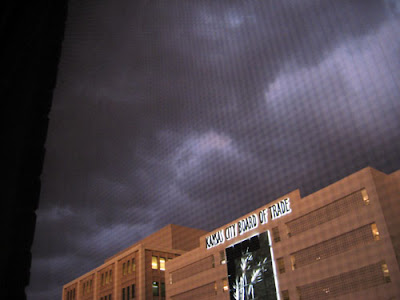 May, means it's still supposed to be daylight outside. You can see how dark and ominous the sky got around that time. And the quiet - very strange. I remembered thinking as I walked up the street, no birds. Not a sound at all. My guess is birds and other wildlife know what to do when something dangerous is on the way. I'll tell you one thing - they don't grab their cameras and run outside to take photos. (Note: A few funnels/tornadoes were generated out of that same sky you're looking at - just a short distance away. Knowing that now, gives these photos new meaning).

The darker photo below - I think this was taken around 8 PM, perhaps a bit later. I love seeing lighting, especially the streak kind. It's next to impossible to catch a good shot, so I decided to simply close my eyes and start to press the button every 5 seconds, which I did for a minute or 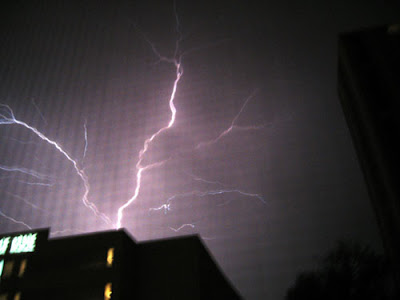 two. Once I was done, I was thrilled to see that I had caught one shot showing a few bolts just above the KC Board of Trade building, directly across the street from my apartment.

Rolling Thunder - I'll close with this. I think it was around 1:30 later that morning. Something woke me up and I'm a pretty heavy sleeper. (I slept through the mini-earthquake they had here a few weeks ago). There was this sound; not sirens this time. It sounded like thunder but, no - it couldn't be. It just kept going and going and going. A roar, rumble, deep tone - sort of like - ?? Well, what do they say? How many times have we heard those testimonies? "It sounded like a freight train." Isn't that what folks always say about a tornado? But there weren't any sirens this time. Then again, if a tornado had already lifted every telephone pole in the vicinity out of the ground, why would anyone even think there would be any sirens left?

No. This wasn't a tornado; it was definitely thunder. But perpetual thunder. The lightning kept flashing, over and over again, keeping the thunder company. It looked and sounded like what I'd imagine a bombing raid would be like. This fiasco lasted for what seemed like an hour, perhaps more. And I'm telling you, for the 4th time now, the thunder had no breaks. Have you ever heard such a thing? The wind whipped and the rain was coming down in a big way. I smiled when I thought about my car, nicely tucked away, four floors below ground in the garage next door. I had no hail worries this time. That calming thought, alone, allowed me to fall asleep I think. Add the rain, the thunder, the lightning - at some level, it was all kind of soothing to me. I like storms; once I know I'm in no danger, that is.

I heard stories the next day at work, confirming that, in fact, a very strange line of storms had passed through the area earlier that morning. And that was, in fact, an hour of non-stop thunder. And these weren't just some one-day visitors talking here. These were Mid-West storm veterans who were passing along this info, so I figured I'd experienced something unusual.
Okay, then.

And this is just the start of tornado season. I'll keep my camera ready.
I won't do anything stupid, Mom.
Posted by H.J. Getzov at 12:30 PM